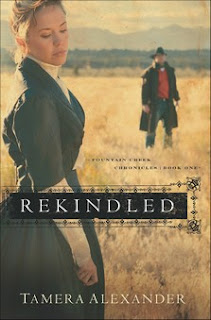 Ten years ago Kathryn Jennings made a vow. For better or worse. And that promise still holds true, even though her marriage has not turned out as she expected. When her husband fails to return home one stormy winter night, she struggles to keep their ranch, but her efforts are blocked at every turn. After a shocking glimpse into her husband's past, Kathryn uncovers a hidden truth. What she wouldn't give to turn back time and be able to love her husband for the man that he was, not for the man she always wanted him to be.

Larson Jennings has spent his entire life running from a broken past, unable to trust, reluctant to try again. One fateful night, his life takes an unexpected twist, and soon he is forced to make a choice. Whatever he chooses, his decision may cost him his life.

At a different time, in a different place, under different circumstances... could two people fall in love once again?

When unfortunate circumstances separate Kathryn and Larson Jennings, they are given a second chance at love.

The title of this book tells it all, with just one word. Absolutely brilliant. It’s no wonder that Rekindled, a debut novel for this author, won a 4 ½ star review from the Romantic Times. It is not your typical romance, yet it is. The main characters are already married, but the romance is not in the least boring. Tamera Alexander did a great job of plotting this book, and keeping the romance alive and going. I don’t want to give any spoilers, so I won’t reveal what happens to separate these two, but it works. Both of them have to face immeasurable difficulties... things that any normal human being would rather not face. But with a strength that can only come from a strong faith in God, they keep going and become stronger people for it.

Rekindled is about more than just romance. It’s about the way God can take tragedy and transform it into a thing beauty. It’s also a testament to the determination and fortitude of the human spirit–something that makes mankind so completely separate from the animal kingdom.

With twists and turns that keep you guessing the whole way, this is a book that will keep you up way past your bedtime. So read at your own risk.

There was some sensuality in it, more than might be expected from a Christian book, but very tastefully done and not enough to warrant even a sensual heat level. The focus was on the love between Larson and Kathryn, and nothing inappropriate was shown. I recommend it to young woman of any age.

Review by Violet
Posted by The Long and the Short of It Reviews at 7:54 PM