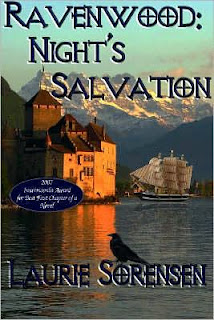 Duty, love and passion take flight on the wings of destiny. Compelled by honor and duty, Night Ravenwood leaves the life on the sea he loves to return home after the death of his brother. As heir to Ravenwood Manor, he finds himself in an arranged marriage and living a life he did not want. When tragedy strikes the newlywed couple, Night finds himself in love with the beautiful and serene Satine, they are tested in every way. Satine vows to make Night understand his destiny is with her while someone is willing to commit murder to keep them apart. Will love or murder shape the diestiny of this union?

RAVENWOOD: NIGHT’S SALVATION begins with all the elements I love about English historical romance. I recognized so many of the trappings; it seemed as if I were going home for a visit.

Feeling smug, I settled in for a comfortable read thinking I could guess the way events would unfold. Was I in for some emotionally fraught surprises!

A subtle hint of mystery about family lineage slips into the story. A ‘white witch’ who steals my heart arrives on the scene. While Mrs. Sorensen moves gently along, she creates a cast of characters whom are many faceted. They show strengths and weaknesses that make them come alive, as each seems to be tested at some point in the story.

The unenviable position of a second son of nobility in eighteenth century England society plays a major role in the unfolding of Night’s story. His salvation as well as salvation for the whole family arises from a tragedy.

Murder, attempted murder, tragic death, and madness propel the story along as heartbreaking, heartwarming, and breathtaking events take place. Amid all the chaos, love blooms. Some spicy, hot, sensual love scenes, that more than jumpstart the reader’s imagination, create a world apart from all the mundane happenings at Ravenwood Manor.

Ms. Sorensen tells a tale that takes the reader on an emotional roller coaster ride at times but there is a safe landing with a happy-ever-after. This is one to enjoy!

Review by Camellia
Posted by The Long and the Short of It Reviews at 5:01 PM