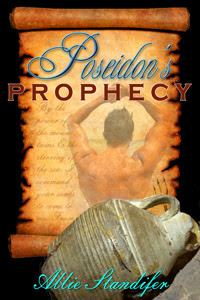 Suspenseful, and often hilarious, Poseidon’s Prophecy is a journey over land, across oceans, and under desert islands to save the fates of one demi-god, one testosterone filled family, and one snarky Marine Archeologist.

Clio Foster is happy with her boring and tidy life. As head of the underwater archeology department at Lone Star State University, Clio finds satisfaction in her work. Her secret passion is finding the story behind the ancient jars that caused her parent's death. But those same jars are now bringing trouble in the form of Kryssin Poseidon. An eccentric and mystifying man, Kryssin gives her the promise of adventure. Something Clio never thought she'd want. But when she's attacked by a creature she can't describe, Clio wonders if Kryssin is hiding something more than his family's history. Kryssin Poseidon knows Clio Foster is the one person on earth that belongs to him. He was the fourth son of the god, Poseidon. He feeds on
Ambrosia, the blood of mortals, to ensure his life and immortality. His soul was taken thousands of years before, along with his brothers, to save humanity from the enslavement of the Seekers. Shadow Hunters are a race of demons sworn to unleash the Titans to rule the world. Clio literally is the keeper of his soul. In order to get it back, Kryssin and Clio must go through the trials of the oracles together. But Kryssin isn't sure Clio is ready to hear the truth about him or the jars she holds so dear. Those jars are the secret to unleashing the curse on his soul and will gain him a piece of the lost Trident.

Can a demi-god and an archeologist, hell-bent on discovering the truth, put aside their differences long enough to use what’s in the clay jars? They have to save his brothers and mankind from Scaber Demons intent on bringing about the destruction of humanity.

Clio Foster is a boring marine biologist. She isn’t beautiful and she doesn’t ooze sex appeal. Kryssin Poseidon isn’t boring and he oozes sex. He also just happens to be the fourth son of the god Poseidon, the fourth of nine. But he has a problem, he has no soul. And he is convinced that Clio is the keeper of his soul. It’s hard trying to convince a nice boring girl that this uber sexy hunk not only has the hots for her, but that she is the keeper of his soul. Throw in the fact that she thinks he’s crazier than a loon, and she gets the overwhelming need to take a valium every time he opens his mouth and you have some great reading.

The character of Clio Foster was in a word….fabulous. She is smart, funny, sarcastic and not going to take crap from anyone, no matter how drop dead gorgeous he is. What was so fantastic about her is that although she isn’t beautiful, tweed and bad hair abound, she has an inner strength and smart mouth that just blows you away. She is convinced that all these calendar models/ brothers running around need to be locked up, but instead of running for the hills, or taking a valium, she gives as good as she gets. Witty banter flies around as she lets these boys know who the boss is.

Kyssian Poseidon is the first of the brother’s to find his soul-keeper. And he does a wonderful job of screwing it all up. Going no place any brother has gone before; he makes every mistake in the book trying to “woo” Clio. He needs her; he just sucks at explaining it to her in a way that doesn’t make her want to hit him upside the head. Throw in his own insecurities, alpha male tendencies, amazing sex appeal, and you get one great hero.

Poseidon’s prophecy is a fast paced page turner. The dialogue is witty, almost razor sharp, and all those hot sexy brothers running around makes for a rollicking good time. I adore a strong female character. One that isn’t afraid to say what’s on her mind and can kick ass when she needs too. And while all these men think she needs protecting, she does a brilliant job protecting herself. Because nothing is worse than a fainting heroine…oh wait. Allie Standifer has well developed main characters, and secondary characters so intriguing you can’t wait to learn more. Toss in a chain-mail sending oracle, a conscience that just happens to be female, scary demons bent on destruction, cryptic scrolls, an ancient prophecy, sex, water and adventure and you have a truly superb story. And nothing makes me happier than a book filled to the brim with fine-looking, dangerous men. I was left wanting more. I want to know what happens to all those hunky brothers. I want the next book to come out next week. I just want more of this series. And that IMO is the best thing you can say about any book.

Reviewed by Zinnia
Posted by The Long and the Short of It Reviews at 6:08 AM