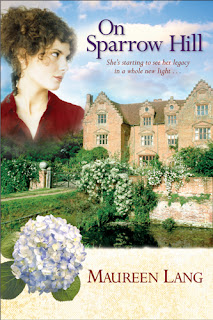 On Sparrow Hill
by Maureen Lang

As the curator for Quentin Hollinworth's family estate, Rebecca Seabrooke is focused on just two things: making hers the most successful historical home in the country and forgetting the childhood crush she's had on Quentin since her father worked as his family's valet. After all, they don't exactly run in the same circles.

But when she and Quentin uncover letters in the family vault written over 150 years ago by Berrie Hamilton — one of Quentin's ancestors — Rebecca discovers that Quentin isn't the only one with a legacy to appreciate. Only Berrie's words can prepare Rebecca for the dramatic turn her life is about to take.

Rebecca is the last of a long line of Seabrooke’s to serve the aristocratic Hollinworth family. She isn’t a valet as were her antecedents, but she is the commercial manager for Hollinworth Hall. Ever since she was a teenager, Rebecca has harbored a secret crush on Quentin Hollinworth, the current owner of the estate. When it appears Quentin might reciprocate those feelings, Rebecca is torn. Times may have changed, but Rebecca is still a little old fashioned when it comes to class distinctions. In her mind, she’s still a lowly servant, and everyone knows servants and masters don’t mix. Or do they? With so many obstacles standing in the way, not the least of them Quentin’s own aristocratic snob of a mother, will Rebecca be to let go of her fears and biases, and just trust...both God and Quentin?

On Sparrow Hill gives readers a double dose of enjoyment. While it covers the modern day love story of Rebecca and Quentin, it also slips back in time to 1850's Ireland to reveal the ups and downs in the life of Berrie Hamilton, one of Quentin’s great-great ancestors. I confess, I am much more drawn to historical romances than contemporary. Just a personal preference. But with this book, I found the modern day romance just as engrossing as the historical. And that’s saying a lot, for the historical thread was wonderful. Maureen Lang has done a wonderful job of mixing the two stories, and pulling the reader equally into both of them. I suppose that’s one reason why the Romantic Times gave this book a four and half star review. A high honor.

Though very much a romance, On Sparrow Hill is not “fluff.” It deals with some serious issues, such as children with fragile X disability. The author’s own child suffers from this, so she knows first hand what it’s like to live with and care for such a person. It also deals with rekindling faith in God, with trusting Him fully, with understanding what one’s place is in the world and God’s plans, and of following His calling no matter what the cost. It is also about His blessings in return when His children are obedient to Him. The Christian message is clear without being preachy.

As would be expected for a Christian book, there is no cursing or inappropriate sexual scenes or innuendos. It’s a good clean read with not one, but two satisfying endings. Highly recommended for women of all ages.

If you go to Maureen Lang’s website, you can see a trailer for this book.

Review by Violet
Posted by The Long and the Short of It Reviews at 5:38 PM