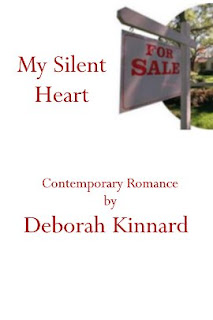 My Silent Heart
by Deb Kinnard

Diane Marshall knows loads--live loads, dynamic loads, dead loads, all part of life as a construction manager. She’s used to carrying hers, as a woman in a man’s career. After her boyfriend fell hard for someone else, can her private load get any heavier?

In DeBrett, Paul Cameron funds the church renovation, so he’s assigned to co-manage. Diane is stuck with adjusting to small town life and dealing with a widower who apparently wants a memorial to his lost wife. Paul is stuck working with a person who attracts him—the last thing he wants.

Somehow this project will teach them to trust God in a whole new way. Now if they can only figure out how…

Diane Marshall’s job is not the dream job that many women fantasize about: she works in construction. She supervises a group of men as they build and complete buildings. After a bad relationship, she has learned not to trust anyone and always leaves a place as soon as she finishes her job. Her boss sends her to DeBrett, a small, almost Spanish community that needs church renovations. As she adjusts to small town gossip and fellowship, she is drawn to the widower who gave his wife’s insurance money to fund the church renovations.

Paul Cameron lost everything of value in his life when he lost his pregnant wife to a car accident. He has grieved hard and many residents of DeBrett know that the laughing man that had been a big part of their community will not make an appearance anytime soon. Paul, however, feels that he is ready to come out of his grieving. After all, his wife would want him to go on with his life. And who better to help him do that other than Diane Marshall. However, there are more issues at stake than just trying to adjust to one another. Will Paul’s mother-in-law accept the new woman in Paul’s life and can Diane learn to trust again?

This novel started out slow but picked up speed as the story line evolved. The characters, Paul and Diane, are quite human. I really liked this novel due to the fact that Paul, in the beginning, needed help like every other human being. Usually stories elaborate on the heroics of the man and how he swoops into the save the woman. That was not the case in this novel: Paul needed and depended on Diane. However, as the story progressed Paul did become a bit heroic wanting to save Diane from herself and her ambition. God’s ability to guide and direct his children is depicted powerfully as both characters struggle through their fears and worries. The Spanish cultural tidbits added interest and warmth to the story. All in all, My Silent Heart was a great read that will provide enjoyment to anyone who reads it. For all those inspirational fans, this is a must read!

Review by Jasmine
Posted by The Long and the Short of It Reviews at 8:22 PM