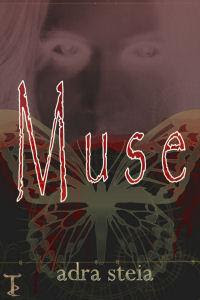 It was too good to be true.

After ten years, Miguel rushes to Leah’s rescue. When she truly needed him, he wasn’t there for her and she can’t forgive him. Despite their deep, psychic connection, she can’t find it in herself to forget. Even as they begin their new lives together, she can’t shake the fear he’ll disappear again.

He calls La Mariposa his Muse.

The vengeful spirit is out for blood. After several violent attacks against Leah, both she and her brother-in-law are convinced there is more to Miguel’s ‘ghost’ than anyone knows. As they struggle to uncover the truth, past resentments flare to life. An old rivalry sparks, but will their mutual love for Miguel dampen the flames before it’s too late to save the man they both love?

When terrible, bloody secrets are revealed…

Will Leah be strong enough to save Miguel? To save him, she has to face herself and what lurks inside her heart is the worst enemy of all.

In Muse, romance weaves together the elements of fantasy and even thriller, to create a powerful tale of love, and too much love, and of psychic ability that lets in more than the sight. Moods and emotion capture body-builder/artist Miguel Dominguez as surely as any cage. His ability to reach outside himself, to admire, to gain a sense of the feeling behind place, person, or artwork gives him a rare muse create from. Danger comes to him in a burnt orange aura, for example.

The muse is all too powerfully real, however, and there are those--still wonderful, very beautiful--that reach back from afar. And Miguel's other failings undermine his connection with the real world. A bond from his past offers him a certain grounding, with the unusually spiritual woman, Leah. It will become a battle, with Miguel's physical safety in as much danger as his mind.

Steia's world is a very realistic contemporary, set in Florida. Her amazingly detailed descriptions are nearly art in themselves. In the opening, she introduces a "Mediteranean style villa... A massive fountain gurgled in the stone-tiled courtyard. As he passed it, he noticed koi gliding gracefully under the rippling water. Tropical plants lined the walls..." Throughout, places and people are described in ways that offer a perfect picture of them. A palatte of colors depicts people, and one complaint might be that the evil are stereotypical, (another former football player with massive ego, for example,) while other characters have far more depth. Changes in point of view seem confusing at times, though offer important insight into how other characters (specifically Leah) percieves how others see her.

Muse offers a clash of fantasy and reality, in a world that is yet hauntingly real. Steia's remarkable vision offers us, as readers, a very different way to define reality. The haunting cover design is a very nice compliment to the story.

Review by Snapdragon
Posted by The Long and the Short of It Reviews at 11:58 PM