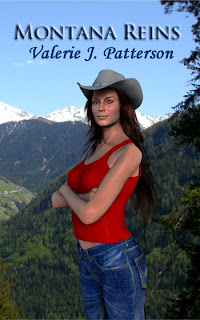 Montana Reins has always been a loner. Her mother died when she was born, and she’s spent her life moving from ranch to ranch with her father, learning his trade – horse trainer. She’s never had the opportunity to make any permanent friends...which makes it hard to let people into her life. Especially someone like Ethan Sterling.

Ethan Sterling hired Montana Reins because of the reputation that went with the name – the best horse trainer alive. When Montana shows up, he’s more than a little disgruntled to learn he actually hired the daughter and not the father. Their first introduction is even less than auspicious--Montana saves him from a trampling under the hooves of his prized stallion.

But Montana’s never quit a job once she’s accepted it and she’s not about to start now. She’ll make the best of things, curb her own fiery temper and deal with Sterling’s, and do her best by the job. That would be much easier if she didn’t find herself fighting unfamiliar feelings for the man...feelings she’s never felt for any man. And Ethan’s obvious interest in furthering those feelings isn’t making things any easier.

MONTANA REINS, a western romance, reaches out and pulls the reader into the lives of Ethan Sterling and Montana “Tana” Reins from page one.

This character-driven story holds the reader captive from start to finish. The classic romance plot doesn’t take the reader to cliffhanger incidents but propels her along in a maelstrom of emotions as love slips into Ethan’s and Tana’s lives despite hostility, misunderstandings, and the interference of self-serving individuals.

Themes of unselfishness and a hard work ethic run steady and true through the novel. Becoming aware of the deepest needs Ethan and Tana have and the differences in their past lives, creates a sense of urgency that holds the reader spellbound.

The well-developed secondary characters give depth to the story making it come alive so the reader feels like they are neighbors and friends. They are like people with whom one shares good and bad times—laughter and tears.

MONTANA REINS is a ‘feel-good’ romance that this reader spent a cold Saturday afternoon with and enjoyed every minute of it. A JOY TO READ!

Review by Camellia
Posted by Long and Short Reviews at 2:17 PM