Review: Isabelle and The Outlaw 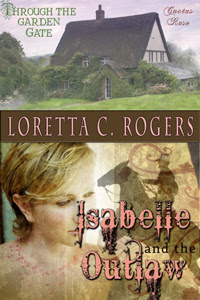 Isabelle and the Outlaw
by Loretta C. Rogers

Two hundred years in the past, an Apache Shaman mixes his potion, chants over his magic bones and calls to the four winds to bring a woman to save Raphael Sinclair.

Professor of American History, Isabelle Landers lives by the “Murphy’s Law” creed. If it’s going to happen—it’s going to happen to her. While vacationing at a charming ivy-covered cottage in Bury Lancashire England, Isabelle walks through the garden gate and into a time portal that lands her smack dab in Arizona’s outlaw territory.

Yuma, 1870. A hanging should never go bad. Raphael Sinclair struggled and demanded he was innocent and if they’d wait there was a telegram coming to clear his name.

One of The Wild Rose Press' award winning 'Through the Garden Gate' series, Loretta C. Rogers' "Isabelle and the Outlaw" is a delightful cowboy classic with a hint of fantasy.

Main character Isabelle Landers is determined not to wallow in self-pity, and charges off on an Arizona vacation specifically selected for its change of pace. Another time but in almost the same place, an outlaw struggles for life and justice. The contrast between the two is remarkable, but the somewhat abrupt changes in point of view seem jarring. Yet, the return to our heroine, Isabelle, is handled smoothly, and we are swiftly intrigued by the photographs and scrapbooks that she has found in her "magical" vacation abode. Coincidences and strange connections keep us guessing.

Roger's weaves some touching moments together with thought-out descriptions, in a lovely way: "Rafe's throat hurt. He wanted to speak to the animal, to give words of thanks for the gelding's stout heart. When the soreness of his throat closed off words, he reached forward and patted the animal's sweat foamed neck."

Events conspire in entirely unpredictable ways, and a relationship emerges where once, two different kinds of escape had been pursued. It would be so easy to say too much and give away the many surprises here! Although there are moments that lack descriptive clarity, the emotions are strong throughout.

This is a charming and unusual romance, twisting together the contemporary with cowboy history.

Review by Snapdragon
Posted by The Long and the Short of It Reviews at 7:03 PM