Review: Girl of My Dreams 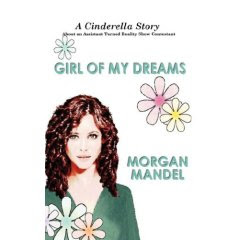 Girl of My Dreams
by Morgan Mandel

When the cast of a new reality show targeted to save a foundering TV studio succumbs to food poisoning, Jillian, the temporary assistant, sets out to round up a contestant, but ends up filling the gap herself. Her boss, the producer, discovers what she's done, but it's too late to stop her. She's already there and the show must go on. Believing his loyal assistant has turned into a selfish conniver like his screen-star mother, the producer is furious. The further Jillian advances in the rounds, the more convinced he is of her deceit. Jillian faces all sorts of embarrassing situations and adventures on her way to the main prize of the millionaire. He's obviously attracted to her and she should be happy. The problem is Jillian loves the producer.

Ms. Mandel brings us a fun twist on the traditional Cinderella story. Jillian Baker, Blake Caldwell's temporary assistant, is capable and efficient and in love with her boss. When food poisoning threatens to derail Blake's new reality show, Jillian does what any woman in love would do. She takes advantage of a loophole in the rules and steps in to replace the missing contestant. But, the best laid plans of mice, men, and temps go awry and, rather than being cut in the first episode, Jillian progresses further and further in the contest.

Jillian is the epitome of Murphy's Law... if anything could possibly go wrong in her plans, they will. From one disaster filled episode to the next, Jillian's penchant for doing the wrong.. or the right, depending on the viewpoint... thing keeps her in hot water, keeps the millionaire intrigued and keeps her former boss trying to maintain a balance between his show, his desires, and wanting to grab Jillian and sweep her away.

Add Jillian's best friend and Blake's parents to the mix and you have a fun-filled light comedy that is a pleasure to read. Girl of My Dreams is funny, has great descriptions of the exotic locales the show visits, and is just an enjoyable afternoon read.

WE ARE GIVING AWAY AN AUTOGRAPHED COPY OF THIS BOOK IN OUR AUTHOR SPOTLIGHT CONTEST! As an added bonus, all comments on this blog post between 2/25/08 - 3/1/08 will earn an additional entry into the contest! -- DRAWING TO BE HELD ON 3/2/08. GOOD LUCK!

NOTE: If you have a private Blogger profile or a profile with no email address available, you must include an email in your entry -- this is how we inform the winner. If we are unable to locate an email for you, you're ineligible to win this prize. Thanks!
Posted by Long and Short Reviews at 3:00 PM