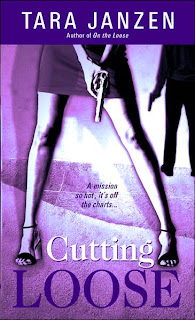 CIA operative Zachary Prade made his name taking out world threats. But now he’s tracking a very different kind of danger, and her name is Lily Robbins. Lily holds the key to a valuable encoded file that’s about to fall into the wrong hands. All Zach has to do is retrieve the key and forget the rain-soaked beauty who came to his Central American plantation seeking shelter from more than the weather.

Lily knows him as Alejandro Campos, the seductive drug lord who saved her life in El Salvador. Now, back in the U. S., hunted by spooks and assassins, Lily has to trust Campos again. Except his name isn’t Campos, and he’s arousing a passion so hot, it’s criminal. That is, if they can survive long enough to enjoy it …

Get ready for another muscle car ride in this latest heart-pounding adventure for the chop-shop boys of Steele Street. Tara has done it again. Reader satisfaction is delivered in this book because this story picks up where On the Loose left us -- in a tease. In reading a series, sometimes you know which characters the next book will pick up on from the threads left for us readers at the ending of the previous story; sometimes not. I’m pleased to say that Tara followed Alejandro Campos and Lily Robbins back to the States and the mayhem continues.

I remember Lily being intrigued by Alejandro and a bit dismayed because she’s a prim and proper school teacher and he’s a drug lord. After three weeks of being back at home, how can she even dream of him at night, having him star in her private fantasies when he’s such a bad man?

Oh yeah, Alejandro is bad alright -- in all the right ways. He’s actually Zachary Prade and he’s been working deep undercover for the U. S. Government for years. So deep, no one from Steele Street even knew he was still alive. All that’s blown open in Cutting Loose and the key to getting the boys back together is a sweet 1968 Shelby Cobra Mustang named Charlotte the Harlot. How can you not love a car with a great name like that?

My favorite thing about Lily is the fact that she’s not only a mild mannered teacher, but she’s dead on target with a gun. She’s soft yet tough, scared witless but willing to do what needs to be done to keep her and Zach alive. I appreciated the way she was written. She forgives her less than gentle treatment by Zachary; when the bullets fly and his subsequent clever use of a cell phone is worthy of any James Bond predicament. My appreciation stems from the fact that once she understands the why’s of it all, she doesn’t harp on it or get mired in prideful affront but locks and loads and is willing to run by her man.

Zachary is quite the man. Successful at what he does, patriotic to the core and totally committed to the mission, which in his book, means saving her in addition to the macramé bracelet – Zach wants to save the day, win the woman and drive the car. Of course he gets what he wants but not in the order he’d prefer. But through it all, Zach is hot, manly, in the drivers seat yet Lily has him going out of control. I love it when that happens.

The players after the key are brutal, conniving and have full access to technology, same as the boys from Steele Street. Remember Baby Bang and the head honcho, Dylan Hart from Special Defense Force? Well, she does her computer thing, keeping Zach and Lily one step ahead of the bad guys. Dylan has connections and he’s busy trying to pull them in but things get really hairy. Even though that muscle car is cruising at 120 MPH, trying to get them back to Denver where the Steele Street offices and safety are located is iffy, when road blocks, police in two states and international hit men are all on their trail, and closing fast...

As with all the guys from the chop-shop gone government agency on Steele Street, Cutting Loose shows a strong man falling in love with a strong woman in a world where the strong survive by the skin of their teeth and the emotion of love moves like a ninja, sneaking up on these guys no matter how hard they try to run. I enjoy a hard-won HEA and Zach and Lily certainly get theirs. What a fun read.

If you like love, adventure, sparks and page-flipping action, look no further than Cutting Loose.

Reviewed by Xeranthemum
Posted by The Long and the Short of It Reviews at 4:42 PM