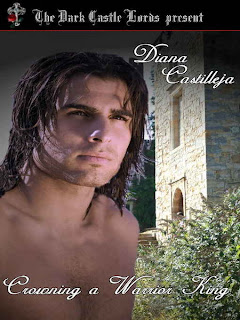 Life has been calm and quiet for Aran for almost seven years since moving into Banter. She is a prosperous business owner, has friends, and helps those in need without question. Yet a delivery of a mysterious jewel encrusted box changes all of that for her in an instant. Not only is the mysterious box enchanted, revealing someone knows of her deepest secrets, it imprisons a man unlike any other. Bold, fearsome, strong. A warrior from a place she's never heard of, a land she's never known. And the most glaring fact to his arrival is she is the only one with the knowledge to set him free, with a magic he cannot trust. Rordan must return to the kingdom of Eglandor to stop the wicked sorceress who has imprisoned him, deliver the throne to King Tah-lel's appointed heir, and fulfill his destiny with the woman from another time, another world. And there's only so much time to do it all with the King's health failing and an uprising from within only waiting for the moment to claim the throne.

Aran Larson is a spirited and powerful witch who uses her knick-knack shop as a cover for her abilities. She’s afraid to let her customers know that it’s really her spells and enchantments--and not the aromatherapy candles she sells them--that heal their ills. When a mysterious guardsman appears on her doorstep with the gift of a jewel-encrusted box, Aran never guesses its contents will force her to reveal her powers and will even pull her into another world. Rordan Hawke, the one warrior in Eglandor who stands between the ruthless witch Branwyn and the throne, is the slave of the box. Rordan vows that one day he will be free of Branwyn’s curse and that never again will he allow a witch to control him.

Crowning a Warrior King is a spicy fantasy that carries the reader across parallel worlds as the hero and heroine work together to end his slavery and save the kingdom of Eglandor. Aran must expose her magical powers, relying on her abilities to protect them both, and Rordan must overcome his hatred of witches and accept that only Aran, the lady he vows to protect, can keep Branwyn from the throne.

Rordan, with his long black hair, expressive black eyes and tall muscular frame is a gift that few women would mind receiving. The attraction between Rordan and Aran is instantaneous and adds a sensual magic to this story of enchantments, castles and curses. The author paints a fantastic world in Eglandor, peopled with fairy folk, elves, and the villainous witch, Branwyn. And if I occasionally got confused by some details, or thought the identity of the heir to Eglandor’s throne was obvious well before it was revealed, the author more than made up for these flaws with her attractive characters and sexy romance.

Review by Hydrangea
Posted by The Long and the Short of It Reviews at 7:27 PM