Review: Cat In The Mist 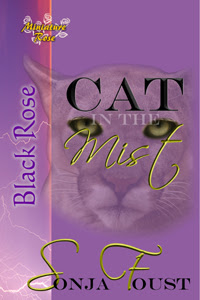 Cat in the Mist
by Sonja Foust

Loner P.I. Blake Alexander hoped he wouldn't have to involve anyone else in the investigation of his grandfather's death, but the live-in nurse, Karma, suspects foul play… and has secrets of her own. Little does she know the secret of who Blake really is could kill them both. Can Blake resist giving Karma the truth, and perhaps his heart, or will she convince him to confide all to save her—and himself—from the danger prowling in the misty orange grove?

This is my first foray into the paranormal romance genre and it wasn't disappointing. Although it involves people who aren't really people, I totally bought into it.

Blake and Karma are an interesting pair. Both are tough cookies with a soft center. I liked that Karma was intelligent and didn't believe Blake's story without some proof. Blake's character was sexy and myseterious and for a while I was worried that things might end badly with him.

Although it was short, there was plenty of story here. The pacing was quick. It kept me reading from beginning to end (My bum didn't leave the couch until I was done).

I don't want to say much about the plot because I think readers will prefer to have this story open up to them as they read. I will say, though, that if you enjoyed the romance between Buffy and Angel (Buffy the Vampire Slayer), you'll enjoy this one--only instead of vampires it's critters.

Review by Lavender
Posted by The Long and the Short of It Reviews at 7:22 PM