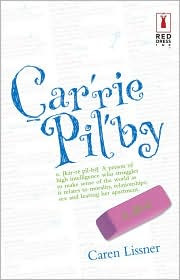 Carrie, 19, is a genius: she's already graduated from Harvard. But social success has always eluded her. She now lives alone in a New York apartment and every week sees a therapist who makes a list of goals for her, including going out on a date and joining an organization. Of course, Carrie goes about these things in her own quirky way. The organization she picks is a church, which she is certain is cult-like and run by a minister who is fleecing the parishioners. She turns to the personal ads for a date and picks Matt, an engaged man looking to cheat on his fiancée, so she can rat on him. But even Carrie can't predict that she'll be attracted to Matt or that the minister is actually moral. Will Carrie find happiness by New Year’s Eve, as per her list? Or will she be disappointed yet again by her efforts to fit into the world around her?

I picked up this novel after I read the novella “Carrie Pilby’s New Year Resolution” in a chick lit anthology. I enjoyed the main character the first time around and was hoping to be entertained even more by the full-length novel. I did enjoy Carrie Pilby well enough, but after reading them both, I’d recommend choosing one or the other. The novella and the novel are pretty much the same story. Both follow Carrie’s struggle to fit into a modern social scene, and while the people she meets in each story are different, and we see more of her background in the novel, there isn’t much difference in the story arcs or the way both plots end up.

Carrie is a complex character, and what I like most about her is the fact that she isn’t a typical chick lit heroine: she’s really young, first of all, and she’s really smart. This combination, however, puts her at a disadvantage. Her father supports her financially, so she doesn’t have to work. She spends an awful lot of time sleeping or spying on her neighbors, trying to figure out how everyone else but her has managed to have a social life. She is a sympathetic creature, in many respects, because haven’t we all felt awkward in social settings, one time or another? She is funny and insightful, and when she finally meets a guy she clicks with, it just doesn’t seem fair that he’s already involved with someone else.

But after awhile, it’s easy to get fed up with Carrie’s “poor me” attitude. I would have liked to see more conflict in the story, beyond her inner turmoil of whether she should leave her apartment and go to a bar, or stay inside and throw herself a “Pilby Party” for one. Ultimately, she does find a way to fit in with the people around her; she makes a couple of good friends, and she even meets a guy to spend New Year’s Eve with. Though I found the story climax and resolution a bit odd, it does end on an upbeat note. Readers have a feeling Carrie is finally going to “get it” and let a little more of the outside world in.

The minor characters in this novel are well drawn and memorable; I especially liked Dr. Petrov, the therapist charged with listening to Carrie rant about her problems each week, and Joe Natto, the down-to-earth minister who can hold his own with her. The series of men that Carrie dates is worth a laugh too, especially if you’re a single girl wading through a lot of frogs to find that one prince. Kara, the ebullient bisexual that Carrie meets at her legal proofreading job, is a perfect foil to this uptight main character.

Don’t get me wrong; reading Carrie Pilby was an enjoyable way to spend a few afternoons. I think any reader can identify with some part of her struggle to fit in. I just think the story could have been cut about 100 pages without losing any of the true conflict.

Reviewer: Dandelion
Posted by Long and Short Reviews at 2:14 PM