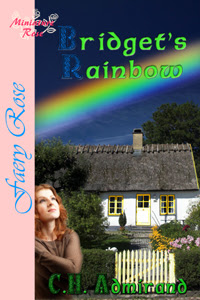 Bridget O’Halloran has a second chance to make a wish when the magic rainbow appears in the mist over Killarney Lake. She wishes for a man to love; one that would be strong and wise and love her forever. But between the voice calling to her from the depths of the lake and the faeries hovering about her, she leans over too far.

Duncan Garvey cannot say why he finds himself driving out to Killarney Lake, but he arrives in time to see a redhead plunge headfirst into the water. He dives into the lake and pulls Bridget to safety, and that’s when the trouble begins. But a clever ghost and a host of faeries conspire to make certain the two lovers find their way back to each other’s arms.

Bridget’s Rainbow is a fun escapade set in Ireland with faeries, leprechauns and a ghost to liven things up. Bridget O’Halloran is determined to wait on the man she’s wished for on a magic rainbow, a man she feels she is fated to marry. The man of her dreams, however, has run away from Boston to escape his demons as well as a broken heart and the last thing he wants is another woman, much less a wife.

Duncan Garvey is in Ireland trying to heal emotional wounds. After rescuing Bridget from a near drowning, he tangles with her brother and would-be fiancé over her honor and sustains some physical wounds as well. Denying his growing affection for Bridget and trying to convince himself that she’s not worth the trouble, the ghost, the leprechaun and the faeries offer advice — and not so gentle persuasion — and help him figure it all out.

There is humor throughout the story and it is presented in a way that is most entertaining. The introduction of the magical beings to Duncan is satisfyingly plausible; being from the States and not accustomed to meeting those from an enchanted world, Duncan’s initial disbelief and then gradual resignation to his new reality are offered with just the right balance. The ghost was especially pleasing in the mischievously manipulative role he portrays in the unfolding of the tale.

Bridget’s Rainbow is a charming story full of wit and complications through the conclusion of Bridget’s and Duncan’s fated path. I recommend it to anyone who enjoys faery-inspired stories and also to those who appreciate a good book that can make you smile.

Review by Camomile
Posted by The Long and the Short of It Reviews at 3:40 PM