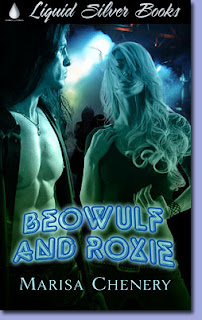 Beowulf and Roxie
by Marisa Chenery

When Roxie and her friend, Candice, decided on a girls' night out, she didn't realize the Wulf's Den would be more than she had anticipated. But Roxie soon learned to expect anything. The presence of a super-abundance of super good-looking men surprised her and when the best of the bunch stared at her as if he wanted to devour her, surprise turned to amazement.

Beowulf recognized her as his mate the instant she crossed his path and her scent filled his lungs. But he had to overcome one hurdle. She was not one of his kind—a werewolf. He had waited for years to find his mate and he would claim her even if she was a mortal. He would soon teach her all about werewolves.

Roxie is caught up in strange events. Archaic markings appear on her wrist, and strong forces threaten to tear her away from her love as two other male werewolves try to claim her as their own. Would Roxie and Beowulf be able to keep the bond love had forged or would they lose each other forever?

"Beowulf and Roxie" is about an ordinary woman who becomes extraordinary and when she comes into her powers, she is able to defend herself — and others — in a big way. I love stories that portray strong women that can take care of business, and this one fits the bill. Roxie doesn't start out as weak or whiny, she's just a normal girl that keeps to herself, but knows who she is and is aware of her limitations. This makes her likable as a character and her reactions to the various circumstances she finds herself in more plausible.

The intrigue is engaging; there are secrets and twists, and she teases you just enough to keep you interested. The supporting characters are interesting and move the action along. The antagonist, however, was puzzling at times. His is portrayed as evil and power hungry, but at a pivotal point leading to the climax, he does a couple of things that are out of character, and not really explained.

I did enjoy this engaging adventure. If you appreciate tales of werewolves and women who can kick butt, give this one a try.

Review by Camomile
Posted by The Long and the Short of It Reviews at 7:25 PM