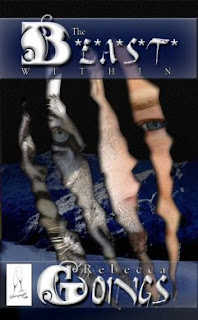 The B*E*A*S*T Within
by Rebecca Goings

When Lanie Erickson is thrown from her car in a horrific accident, she never dreams she'll be saved by a white tiger! Nor does she think meeting the man who claims to be the tiger's 'friend' will change her life forever--but it does.

Noah Carpenter has a terrible secret. Mutated genetically by the agency known as B.E.A.S.T., Noah is a shifter, able to change his shape at will. But he escapes the agency that made him a monster, and now he's on the run. As Noah remembers more about who he used to be, his attraction for Lanie grows until it cannot be denied. Even though Lanie knows of his savage side, she welcomes him with open arms. But when B.E.A.S.T. suddenly abducts her, can Noah save the woman he loves from the torture he once had to endure? And can he do it even if it means killing anyone who gets in his way?

Just like Vampires, shape shifters are all the rage in paranormal romance. After a while, they all begin to sound alike. But The B*E*A*S*T Within starts off a shape shifting series with the most original premise I've seen in the past couple of years: a secret agency kidnaps the heroes, lies to their families, wipes their minds, genetically engineers them with animal DNA, and trains them to fight. There's a lot more to it, but I don't want to go to spoilerville. Some of the neatest things about the premise come out in the story as little twists.

If you exclude the fact that Noah can shift into a white tiger, he and Lanie are fairly regular folks and it's easy to relate to them. In fact, Lanie could be the girl in the next cubicle at work or the neighbor you cat sit for. She makes for a good contrast to the butt-kicking hard-as-nails paranormal heroines that are saturating the market now (although I love that type of heroine as well!).

The main antagonist is the B*E*A*S*T organization itself, but Lanie and Noah are chased by an operative who fixates on Lanie. So much so that his goal seems to shift from eliminating or recapturing Noah to making Lanie his mate. I was a little bit disappointed with this subplot. It is one that I feel is overused - lust for the heroine being a villain's main motivator.

Ms. Goings writes in a very concise, streamlined style which makes for great action scenes. The plot is very linear; one scene causes the next which causes the next and so on which is great for folks looking for a quick, exciting read. This is one of the things I liked about The B*E*A*S*T Within. Everything was set up well with logical and satisfying payoffs. She also set up the sequels this way. By the end of this book I knew exactly whose story I was going to be reading next and what the plot would deal with.

The B*E*A*S*T Within is an exciting downhill sled ride so readers who look for big complex plots should give it a miss. It is recommended for folks who are looking for a quick fix, a screaming fast pace, or for contemporary romance readers who want to dip a toe into the paranormal pool.

Review by Daisy
Posted by The Long and the Short of It Reviews at 7:39 PM