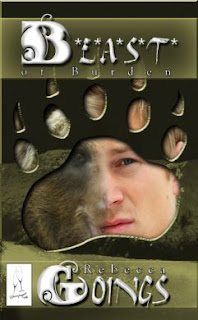 B.E.A.S.T of Burden
by Rebecca Goings

Rogan Wolfe desperately wants to find the wife he doesn't remember. After kidnapping him two years earlier, B*E*A*S*T* faked Rogan's death to make it appear as if he'd died in a gruesome car accident. With that knowledge, he is driven to reclaim the life that was so maliciously stolen from him.

Marlie Silver is in shock. Not only has she just found out that her husband is alive and well, she learns that he's a shifter--able to change his shape into a timber wolf. She's never gotten over his loss and he's offering her a second chance. Problem is, he doesn't remember their life together. But Rogan is being pursued by Sean Ross, a murderous shifter determined to kill him--and Marlie--at any cost. Can Rogan protect her from the man who wants them both dead? And can a wolf ever stand any chance at all against a Kodiak grizzly?

Review: I was lucky enough to snag both B.E.A.S.T of Burden and its predecessor, The B.E.A.S.T Within, at the same time. Normally, I don't read books in the same series back to back because I have a tendency to burn out. But I don't think that's going to be a problem with the B.E.A.S.T series. Each plot leads almost seamlessly into the next. So much so that I could see them eventually presented in one volume.

It stands to reason, then, that the things I liked about B.E.A.S.T of Burden were pretty much the same as The B.E.A.S.T Within: screaming fast, linear plot; interesting, realistic characters; unique premise. On the other hand, the villain lusting after the heroine subplot was present as well, which was the one thing I really didn't like about the first book. It wasn't as severe this time. This villain was more interested in hurting the hero by torturing and killing the heroine, but it was the same basic concept to me.

What makes B.E.A.S.T of Burden different and (I think) better than the first book is the relationship between Rogan and Marlie. Instead of a "boy meets girl" situation, they were married before he was taken by B.E.A.S.T. He only has snatches of memory - images of her, and that's what drives him to seek her out. She remembers everything and is still deeply in love with the man he was. They have to sort out their feelings and attempt to make a new start while on the run. This complex relationship makes for a richer story without slowing down the pace.

The B.E.A.S.T series is recommended for romantic suspense fans, paranormal readers, and anyone looking for a quick, satisfying read.

Review by Daisy
Posted by The Long and the Short of It Reviews at 7:49 PM