Review: The Angel of Bally Ferriter 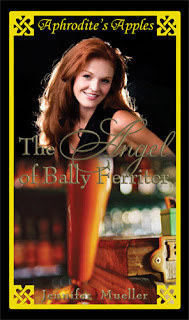 The Angel of Bally Ferriter
by Jennifer Mueller

As a teacher Robert Ahearne has summers off and this time he’s staying in a little village in Ireland learning Gaelic. When another student starts harassing a local barmaid, there’s only one thing to do, team up and avoid the man together. Suddenly learning Gaelic just got a whole lot more interesting.

Ms. Mueller has created a sweet, touching short story about a man who travels half-way around the world to find a second chance at love. Robert Ahearne, a Boston schoolteacher, is taking Gaelic language courses in the Irish town of Bally Ferriter when he meets Alana Riordan, a barkeep pulling taps in the local pub. Before long, he is spending his free time romancing her, and soon Alana adds a whole new group of words to Robert’s Gaelic vocabulary that would never be found in a schoolbook!

I found these main characters very likable, and I’m always a sucker for a romance that strikes later in life: Alana is forty-three, with a nearly-grown son, and Robert is a fifty-year old widower. Yet together they find the happiness and romance of starry-eyed teenagers. The minor characters are also well-developed, with the exception of a shrewish wife who appears later in the story and doesn’t seem to add much to the plot. However, Alana’s son Dillon, and Robert’s classmate and rival for Alana’s affections, Jack, bring good humor to the story.

The setting of small-town Bally Ferriter, Ireland, is romantic and well-described, a perfect place for Robert and Alana’s love to bloom. And although Robert has to return to Boston at the end of the story and leave his “red-haired angel” behind, readers will be satisfied with the ultimate surprise ending of this short story.

Reviewer: Dandelion
Posted by The Long and the Short of It Reviews at 5:48 PM