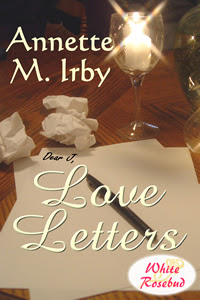 Randy Ambrose has penned scores of love letters to his wife, but she's never seen them. He fears she won't receive his affections, and her rejection would destroy their marriage. He also fears strong emotions, including passion. For ten years, he has kept his heart hidden. Jordan Ambrose is trying to pretend Randy's emotional distance doesn't hurt. She has erected walls to protect her heart. When she finds a box of ardent letters written from R to J, she hopes they?re to her. Randy has some explaining to do, and their tenth wedding anniversary is right around the corner. Can he rescue his marriage by taking an unprecedented risk and making a crucial confession?

Writer Randy Ambrose is on a deadline, but his wife, Jordan, can’t seem to understand his need for peace and quiet, as well as time. On the other hand, Jordan is tired of carrying the load of everything in their marriage while Randy runs after a pipe dream. After nine years of a strained marriage and a pair or rambunctious twins, will Randy be able to communicate with Jordan and really show the depth of his love–and passion–for her? Or will she just reject him...again? Through a series of love letters written over the years, maybe he’ll be able to break through the wall she’s built up around her heart.

Author Annette Irby has taken a chance with this story, but I think it was a chance well worth taking. I can imagine many married couples, though maybe not facing identical problems, do face similar challenges. A lack of communication, fear of really opening up hearts to one another and being hurt or rejected. This is not your typical romance, because it does involve a couple who is married, has kids, and is dealing with the every day sort of things like getting the kids ready for school, and fighting strep throat. I admit to wishing there might have been a little less detailing of the illness, but on the whole, the underlying issues of fear and frustrations within marriage made the story read almost like a suspense novel.

Being privy to both sides of the story, I found myself sympathizing with both spouses, wishing I could shake each of them and get them to face each other. Irby had me rooting for this couple and reading on to find out how they would resolve their issues. Although an overtly Christian story, the sensual rating is appropriate. I don’t mean that in a negative way. The passion shown had to be there to provide a satisfying read, considering the issues the couple had been dealing with. And you knew it was okay because, well, they were married after all. There were no vivid descriptions of sexual body parts, and the passion expressed was one centered on true love. For that reason, despite the sensual rating, I would feel free to recommend it to women of just about any age.

Review by Violet
Posted by The Long and the Short of It Reviews at 7:07 PM