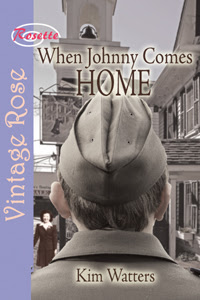 Audrey Roberts's masquerade is about to end in disaster. For years, she's written love letters to Johnny and signed them with her sister's name. Now, the man she adores is coming home to marry his pen pal and Audrey is left to face the consequences of her deception.

Injured during D-Day, Johnny Davenport is shipped home. His only plan: to find the woman whose love letters kept him sane and hopeful throughout the destruction of war. Nothing will stop him from drawing out the beautiful, shy girl he left behind and making her his wife.

But once the true writer is revealed, which sister will he claim?

In “When Johnny Comes Home,” Ms. Watters gives us a lovely, heartfelt story about what happens after war, when a soldier comes home and discovers that the woman he left behind is not the same one who waits for him to return. This was a very satisfying read, aside from some minor editing issues. The setting, post-WWII small town America, is well constructed, and the main characters are flawed, injured by war and its fallout, but extremely likable. You will root for them to fall in love!

Reviewed by Dandelion
Posted by The Long and the Short of It Reviews at 2:01 PM