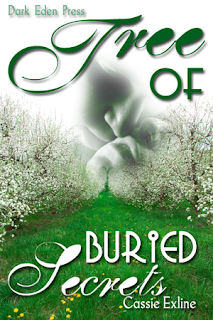 Julia races to their rendezvous site as if the devil is nipping at her heels. Tonight she and Alex are going to elope. Her heart soars when she spots Alex waiting for her by the apple tree. She calls out his name and he hurries to her, wrapping his strong arms around her. Instead of fleeing, Alex wants to make love to her one more time at the same spot where they met, fell in love, and surrendered to their desires.

The white blossoms serve as their bed, releasing a heady fragrance into the night air, and the tree as a witness. But a thunderous crack shatters the night, spawning years of torment, generations of secrets. Julia never told anyone what happened that night, but today might be the day she confesses.

Tree of Buried Secrets is an interesting story that moves back and forth between present and past. The main character, Julia, is now in her seventies and reliving her youth, much to the confusion of her two children, Edward and Fiona. Turns out there are secrets aplenty in Julia’s past, including the answer to who fathered her two children and what became of Alexander, her first true love.

While the flashbacks at times are slightly jarring, and in some cases unnecessary, they do show the love Julia felt as a seventeen-year-old and still feels in her elderly years. For the most part, the questions that continually surface keep this story moving along at a fast pace. The love scenes between the teenage lovers are quite explicit, though, so be prepared! Tree of Buried Secrets is a tribute to the idea of “one true love,“ reminding us that even the march of time and messy family secrets cannot change the most powerful memories of all.

Reviewed by Dandelion
Posted by The Long and the Short of It Reviews at 1:58 AM