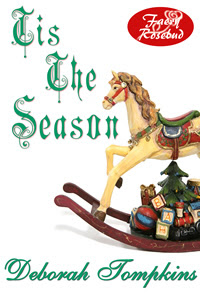 Tis the Season
by Deborah Tompkins

Where was the man who could win her heart? The man who could carry on the Kris Kringle legend? Somehow she couldn't mesh the two. The man of my dreams and my father just weren't the same man.

I found Tis the Season to be a really original idea! Kris is an only child and the only girl in the direct Santa line, and it's up to her to sift through all the men in the whole world to find, fall in love with, and marry, the next Santa. By the time we meet Kris, she's become discouraged that she's become so focused on finding the right man for the job, whether or not he was the right man for her. Kris isn't jaded, though. She's determined, and she keenly feels the stress that the importance of her task puts on her. It's a joy to watch her on her journey.

I felt that the author should have had a little more wiggle room to work with, though. Although novella is a good length for a holiday story, this one felt like a summary of a novel in a lot of places. Important scenes were glossed over with exposition when some dialogue and action would have illustrated what was going on a lot better. And the ending was a little abrupt. I felt that there should have been more of a denouement for maximum satisfaction.

That said, Tis the Season reads like a Frank Capra film and is just as heartwarming. It's the perfect last-minute addition to any contemporary romance reader's holiday reading list. Especially fans of Debbie Macomber's Christmas themed books and readers of Harlequin/Silhouette's holiday selections.

Reviewed by Daisy
Posted by The Long and the Short of It Reviews at 4:11 PM