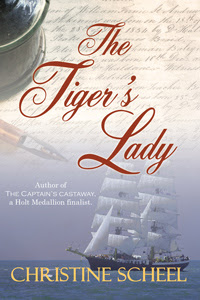 The Tiger's Lady
by Christine Scheel

When The Honorable Captain Jordan Ashworth, of the HMS Tiger, receives orders to transport Miss Catherine Darrington from Lisbon back to London to marry his fop of a brother, Frederick, Viscount Ashworth, he is overcome with incredulity then disgust.
At twenty-three and almost on the shelf, Catherine reluctantly obeys her overbearing father and agrees to marry Lord Ashworth, but secretly dreads it.

Once on board the Tiger, Catherine is drawn to the enigmatic and dangerous Captain Ashworth, but finds herself caught up in a web of espionage and intrigue when a packet of vital dispatches go missing. Both Catherine and Jordan become ensnared in a desperate hunt to find the papers before they fall into the hands of a smuggling ring. The twisted trail leads them straight to Catherine's betrothed...or does it?

This historical romance, set in the early nineteenth century, sets sail in Lisbon and takes us on a journey over the open ocean toward London. The powerful main character, Captain Jordan Ashworth, finds himself charting a complex emotional course, because of the machinations of his brother, the very distant Viscount Ashworth. Honorable sea captain though he is, Jordan must obey orders. His undoing is accepting the order to bring his brother's bride-to-be home.

As events unfold the young lady, Catherine, is (perhaps predictably) drawn to the intense, dark-eyed captain, yet their own obligations, duty and honor are foremost in their minds. This story is delightfully complex, with no easy answers to the challenges set before them. Secondary characters and various threads of the storyline are equally engaging. Just when you think all might be going along marvelously, a second frigate enters the show, flying colors that can change everything...

The Tigers Lady is a super historical romance, and beautifully written. In addition to the intriguing storyline, many details, like the pomp that goes with various levels of naval service, to the neatly furled sails on deck, create wonderful picture of life aboard a frigate in Her Majesty's service. This sort of tale is why I read romances, and plan to re-read this one.

PS: Cover design is exemplary and gives a wonderful idea about the story.

Review by Snapdragon
Posted by Long and Short Reviews at 3:10 PM