Review: Through the Eyes of Love 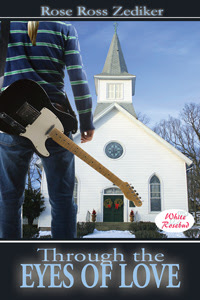 Through The Eyes of Love
by Rose Ross Zediker

Once the gangly boy next door, Mike Redmond grew into a six-foot, six-inch man. His former occupation as a guitarist in a Christian Rock Band necessitated a certain look including waist-length blond hair, goatee and hoop earrings. Forced into a major career change, Mike gave the situation over to God and follows what the Lord put on his heart. Opening a music store in Clearview and winning Audra’s love.

Audra Pope runs a successful insurance agency but shies away from relationships, including one with God. Men want a perfect “magazine ad” woman and, due to her spine deformity, Audra doesn’t meet that standard. Although Mike’s outward appearance bothers an influential business owner, Audra begins to fall in love with him. Can she learn to see people, including herself, the way God does from the inside out?

Mike Redmond, former Christ Rocks My World band member now owns a music store in Clearview, South Dakota. He’s back in the town where, when he was fifteen-years-old, he fell in love with a girl named Audra Pope. Though he has dated through the years, there has never been a woman who measured up to Audra. His buddies razzed him about being in love with an illusion, but Mike knows she is real. When he prayed for guidance, God led him back to Clearview.

Audra Pope suffers from scoliosis and it is a glaring reminder that God has forsaken her; therefore she has given up on God as well. She judges herself by her physical attributes (or lack thereof) and expects everyone does, too. She does not date and has no use for men except in business. In fact, she won’t even rent half of the duplex she owns to a man. It is a shock to discover that there is a new businessman in town, a renter for the duplex, and it happens to be an old friend from her senior year in high school. What begins as friendship could turn into love if Audra will learn to trust a little and have faith that God knows best.

Through the Eyes of Love is a touching story of a young woman’s internal struggle that challenges the human spirit. A compelling read and a feel good story all in one, Audra and Mike’s love story is sure to bring a tear to the eye as well as find a well deserved place on your “keeper” shelves. Rose Ross Zediker crafts likable characters that fell like close friends. Readers will surely cheer Mike on as he sets out to show Audra just how beautiful he and God think she is. The courtship is fiercely tender and intensely romantic; I think I fell a little in love with Mike myself. Audra is a tragic woman I found I wanted to take under my wing. I wanted to shield her from more of life’s disappointments and protect her from harm. A few times I also wanted to conk her on the head and tell her to “look what you are missing out on.” For a wonderfully romantic love story, be sure to pick up Through the Eyes of Love. You won’t want to miss this one.

Review by Wisteria
Posted by Long and Short Reviews at 3:53 PM