Review: The Taming of the Tiger 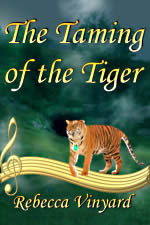 The Taming of the Tiger
by Michelle Levigne

How do you tame a tiger when he's a Marquess with a dark past and quick temper? Lady Gwen Rhys has a solution. Sing! Gwendoline Rhys leaves the stage in Vienna after she discovers her marriage to her composer husband is a sham. With her reputation in ruins, she agrees to marry the mysterious Marquess Brandon Blackwood. Their fierce physical attraction is only one of the reasons why Brandon chose to marry Gwen.

Years before, his first wife, Jennifer, was murdered in bed with her brother-in-law and Brand's best friend, Stuart. Although Jennifer's sister, Diana, confessed to the murders, claiming it was a crime of passion, Brandon suspects the real killer is none other than Gwen's brother, Richard. Brandon wants revenge at any cost. But will he risk losing the woman of his dreams to get it? If you are looking for an interesting plot with characters that run deep, if you are looking for a story you can truly immerse yourself in, this Regency might be just what you're looking for.

I’m not a regular historical romance reader, tending toward mystery, suspense, and the paranormal. But sometimes I get a craving for a big regency. The Taming of the Tiger really hit the spot. Gwen and Brandon’s relationship is epic and tempestuous, fraught with passion, intrigue, and even a little humor. All the elements of a good historical romance. There was even a bonus cameo by a famous couple from the era.

I enjoyed Gwen’s spunky character, but she really confused my post-feminist sensibilities. One minute she’s smart, quick, and practical, standing up for herself and fighting for her relationship, the next she’s irrational and shallow, picking fights with Brandon and fretting over fashion and how she should wear her hair. This could easily be attributed to Gwen being a woman ahead of her social time who has to balance being herself and fitting in simultaneously.

Gwen and Brandon both have short tempers. That, combined with a couple of misunderstandings and an unwillingness to communicate well caused a lot of fights between them. Granted, those fights often led to passion, but that particular plot element is one that turns me cold. The majority of readers won’t be bothered by it.

The tiger pops up a lot throughout the novel. Sometimes the metaphors get a little bit old, but for the most part, the image flavors the prose and makes the book unique within its genre.

It’s the humor, though, that really makes the book sparkle. Although the stakes are high, the situation serious, Gwen’s bad luck and propensity for klutziness provides the reader with just enough of a respite before diving back into the drama.

The Taming of the Tiger is perfect for the occasional historical reader as well as people who primarily read the genre. Fans of Lynsay Sands’ humorous historicals will love it.

Review by Daisy
Posted by Long and Short Reviews at 9:06 AM