Review: A Stroll In The Park 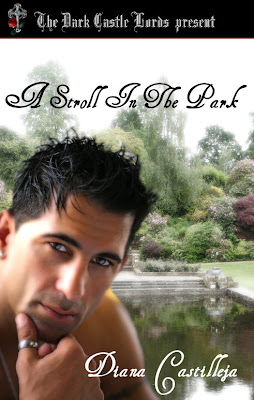 A Stroll In the Park
by Diana Castilleja

Aurora Salvage is looking for a new life, and a new leaf to turn. She's alone for the first time in ten years, when she loses her husband in a tragic accident while he is on assignment. Drake McKenna is the resident professor of the little New England town she's moved into. A small park is the center of the community, and it's the first place she finds a level of comfort. This is an unfortunate turn for Drake, who's all but claimed the park as his own personal sanctuary where he could hide himself and his wounded heart.

When Drake's father falls ill, however, his only recourse is to return to Scotland, and see for himself how things are, as well as try to keep his brother's wife from claiming their heritage from under his brother's nose. He returns to find his father sick and in bed, but not on the deathbed his brother had first insinuated. Instead, he and Aurora shock not only the household, but his brother when he arrives with a wife. Sean described their father's illness as worse than it was to convince Drake to return home, but he'd not expected the turn of events, nor how deeply all would be affected by his homecoming.

The contemporary romance novel, A Stroll in the Park, offers an intense, emotional opening as the main character, Aurora suffers not only the loss of her husband, but in a sense, herself. The sense of isolation, of desperate loneliness that pervades serves to intesify Aurora's personal stregth. She carries on, in spite of all.

Eventually, though, she begins to revel in a sense of freedom and questions what in her life was truly ever her own, wonders if her dreams were her own. Memories, dear though they are, are pushed aside for a whole new world the heroine sets out to discover. Finding a job, developing some level of asertiveness, creating a network of sympathetic people, all are interesting and plausible. Even meeting, oh-so-coincidentally that certain man, seems a natural result of circumstances.

A modern journey story, this well-written romance will strike a chord of familiarity at the start, but also, take us on a twisting and unpredictable journey... and show us just how far one strong willed woman will go.

Review by Snapdragon
Posted by Long and Short Reviews at 4:49 PM