Review: My Shadow, My Love 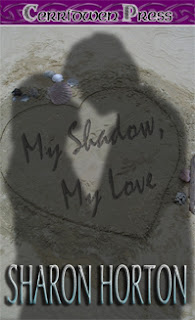 MY SHADOW, MY LOVE
by Sharon Horton

When Cassie Dahlgren first entered the police academy, she expected she’d eventually be chasing down criminals in her chosen career. She never knew that the criminals would be chasing after her. She’s on the run from her former boss, Luther Carstairs, who has proven he has a taste for murder…and his eye on her.

The Technicians are independent from the police, but they work with the police. Rick Jarrett is a seasoned and shrewd Technician who takes his job of protecting people very seriously. When Cassie comes to him as a witness to a senseless killing by a madman, she awakens not only his protector’s instincts but also other feelings he’d almost forgotten he was capable of. Together, Rick and Cassie seek justice and, in the process, find a new, beautiful life for themselves.

From its volatile opening, MY SHADOW, MY LOVE is a true love story seasoned with suspense. Two strong personalities are drawn to each other like magnets. Cassie, with her innate ability to recognize the good and evil in people, finds herself propelled into the world of Rick Jarrett, a Technician who strives to protect those unable to protect themselves. Rick, hardened by years of dealing with the dark side of humanity, is blindsided by his instant attraction to Cassie.

Sharon Horton weaves a multitude of characters into the suspenseful events that often keep Cassie and Rick from each other as their love suffers growing pains. The abhorrent crime of trafficking in human beings puts both of them and their unborn child at risk, as they feel compelled to infiltrate the criminal operation.

This love story embodies the emotions we see in real life—jealousy, fear, hate, and ambivalent feelings toward friend and family relationships.

If you need a read to up your heart rate then let it ease up just to up the rate again, MY SHADOW, MY LOVE is a good choice.

Reviewed by Camellia
Posted by The Long and the Short of It Reviews at 1:34 PM