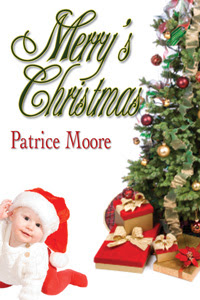 One night of passion in high school between Merry Donovan and Joe Moro--the boy she had loved from afar--was all it took to create a new life. Afterward, Merry gave their infant son up for adoption. Joe never learned he had been a father.

Ten years later, an ex-lover dumps a two-day-old baby on Joe's lap and disappears. He hires Merry, a professional nanny, to care for the infant….never recognizing her as "Mousy Merry" from high school. Joe is determined to keep the baby despite the fact he has no proof he is the father.

Merry can't understand why a single man would want to keep a newborn… until she learns the heart-wrenching secret behind his affection for the child.

But Merry has a secret of her own--and it threatens to destroy the first Christmas Joe has ever celebrated.

The magic of Christmas is about to change Meredith 'Merry' Donovan life forever. Having just lost her job as a nanny, she finds herself working with a Santa that is very 'friendly' toward his female helpers. The store owner is none other that Joe 'Jazzy' Moro, her high school fantasy.

Both of the characters of Merry and Joe experience vast growth and change. I would have truly loved this story if Ms. Moore had not tried to limit it such a short time span. Instead of the HEA happening the first Christmas, waited until the second. I think if Joe and Merry had spent a year together their growth would have drawn the reader in more. Merry has a lot of anger toward Joe. Anger that just seems to melt - Christmas magic. The character of Joe is deep and complex but he also speeds through the hurdles blocking him from having a meaningful relationship.

Joe and Merry's back story is weaved through out in small doses so not to slow down the pace of the story. The pace is quick yet rich in detail. Merry Christmas is rich in detail with a story that could have happen with the help of Christmas magic.

Reviewed by Magnolia
Posted by The Long and the Short of It Reviews at 1:33 PM