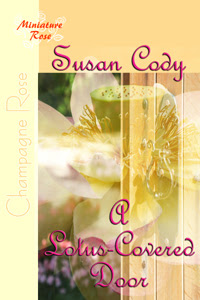 A Lotus-Covered Door
By Susan Cody

Robb has sailed around the world, but he's never forgotten the woman he left in Singapore. Now his restless soul has led him back to her. But is it too late? What will he find when he once again knocks upon the lotus-covered door?

If you enjoy reading a story that leaves your heart in your throat from the suspense as to whether they will or won't, then The Lotus-Covered Door delivers.

This story is told from the point-of-view of Robb, the man who follows the wind. Remember the song, The Wayward Wind? OK, so it's an oldie--but it's beautiful. This story reminds me of that song; of being restless, of seeking and searching but never knowing quite what they need. But, like the song, even when they find it, will it be enough to tame the wanderlust?

This story almost had me in tears. So close, so close to reaching his dream only to lose it?

Lila is the reason he comes back. She's the only reason he feels tamed from the restlessness that haunts him, drives him. I felt his yearning, his hope and his horror when he learns the truth. I remember thinking "Surely not! Oh NO!"

Yes, this little story got me in the heartstrings. It was tight, well written and well characterized. It might be said that the delivery is a bit more telling than showing and if that's so,in this story it works and I didn't have a problem with it.

I appreciated the points in the story where we were switched from Robb's point-of-view to Lila's. It fleshed out the story and helped me connect more with the emotions driving both of them. And wait until you get a load of what Paul does!

A Lotus-Covered Door is a short and sweet delight that embraces romance with sublime simplicity. I'm glad I read it.

Reviewed by Xeranthemum
Posted by Long and Short Reviews at 5:39 PM