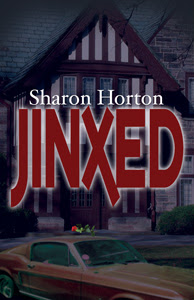 Since being widowed at an early age, Kendra Duchaine has led a quiet life as a teacher in her hometown of Claremont, Washington. Though at times lonely, she considers herself content until a chance encounter with the town's most prominent citizen turns her life into a frightening game of Cat and Mouse. Convinced her dilemma will be shrugged off due to the status of her ardent admirer Kendra feels she is alone in dealing with her problem. For months she's managed to ignore the multitude of letters, phone calls and expensive gifts, hoping in time her admirer would become less ardent. Her hopes fail one morning when she finds he's left a rose on her doorstep. In despair, and feeling her life must be jinxed, she reluctantly seeks help. Little does Kendra know, a 'Jinx' of another kind is in her future.

Very few books hold my attention the way this one did. Honestly, I read it in record time simply because it was too good to stop reading. I wanted to put it down, but I just couldn’t do it. Attention to detail, tight plotting and dynamic dialogue coming from realistic, interesting characters makes Sharon Horton’s Jinxed a winner.

From the first pages I was completely enamored with Jinx, who is one of the most attractive heroes I’ve met yet. And Kendra is smart, sexy and incredibly likeable, the kind of woman any of us know and love, or aspires to be. I felt her pain over losing her husband, and experienced the joy of her opening herself up to accepting love a second time. This story is highly suspenseful while being deeply emotional as well. There is nothing not to love about Jinxed. I sincerely look forward to reading more from Sharon Horton.

Review by Peony
Posted by The Long and the Short of It Reviews at 2:44 PM