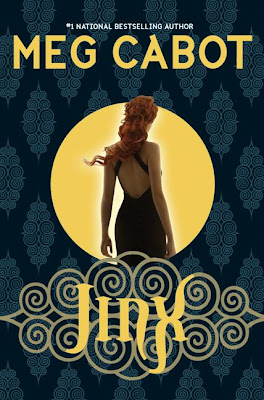 The only thing Jean Honeychurch hates more than her boring name (not Jean Marie, or Jeanette, just . . . Jean) is her all-too-appropriate nickname, Jinx. Misfortune seems to follow her everywhere she goes—which is why she's thrilled to be moving in with her aunt and uncle in New York City. Maybe when she's halfway across the country, Jinx can finally outrun her bad luck. Or at least escape the havoc she's caused back in her small hometown. But trouble has definitely followed Jinx to New York. And it's causing big problems for her cousin Tory, who is not happy to have the family black sheep around. Beautiful, glamorous Tory is hiding a dangerous secret—one that she's sure Jinx is going to reveal. Jinx is beginning to realize it isn't just bad luck she's been running from. It's something far more sinister . . . and the curse Jinx has lived under since the day she was born might just be the only thing that can save her life.

I've been a fan of Meg Cabot's for a long time. Oddly enough, not for her Princess Diaries series, but for her paranormal Mediator series originally written under the pseudonym Jenny Carroll. Ms. Cabot's books have a voice that's unique to her, but she manages to create characters that are completely different from one another who handle the things life throws them in their own ways.

I really like Jean. She's a good contrast to a lot of the whiny, sometimes spoiled characters in recent YA literature. She's a preacher's daughter, but she's not uptight. She's really down-to-Earth and while she may be a little naive, she's not stupid. Jean is a girl with her feet firmly planted on the ground, which contrasts and conflicts nicely with Tory and the witchy plot Jean finds herself in the middle of.

All that makes the book seem like it would be a real downer, but, in typical Meg Cabot style, the book is really funny. Poor Jean has quite a time with some of the pickles she gets into and that makes the controversial subject matter a lot easier to swallow. In fact, written any other way, the story would be a little too preachy for most teens to take.

For the character Jean alone, I would recommend this book to teens as well as adults who like light paranormals. She's a really good peer role model that I would love to have as my child's friend. Tory, not so much. But, in the interest of avoiding a complete spoiler, virtue is ultimately rewarded and vice punished, leaving the reader feeling very satisfied.

Review by Daisy
Posted by The Long and the Short of It Reviews at 2:40 PM