Review: Janus is a Two-Faced Moon 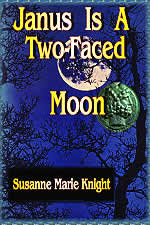 Janus is a Two-Faced Moon
by Susanne Marie Knight

BETWEEN A ROCK AND HARD PLACE. In the year 2458, injured ballerina Blade Sinclair agrees to participate in the Galactic Olympic Games. Unfortunately, she’s on the wrong team; an alien team. If Blade doesn’t win a gold medal, her family will die. If Blade does win, the Sarthox will destroy Earth. What’s a girl to do?

LOVE HURTS. Security chief Christopher Bainbridge has had his share of traitorous females. At the Lunar Olympic Games, he finds himself mixed up with another one. But Blade doesn’t seem like a typical traitor, and against his own inclinations, he falls in love with her. How can he help her escape from the Sarthox and save the solar system at the same time?

I originally decided to read this book as it dealt with subject matter that is near and dear to my heart – dancing – although after many previous disappointing experiences with this same subject matter I wasn’t sure what to expect. I had found being someone knowledgeable of dancing terminology and techniques made me a bit more critical of many author’s descriptions. I was NOT disappointed with this book, in more ways than one.

I must say that Susanne Marie Knight is definitely an author to watch. I greatly enjoyed this book and found it to be a page-turner that kept me on the edge of my seat until the last page. The dancing aside, I found the tale of intrigue and suspense situated in a distant future, grabbed me and held on.

The hero, Christopher, made me smile quite a bit. As Security Chief to the Galactic Olympic Games he has his hands full, and he doesn’t quite know what to do with the extra handful he gets in Blade. He has his demons to fight, as does every good hero. My only issue was that I sometimes felt as if he let past hurts color his view of all women interested in him in any way romantic. Now, don’t get me wrong, his past hurts were pretty great. His last lover had turned out to be a traitor, and it seemed to him that his new love was one as well, so his hedging was at least marginally justified. I did adore his moments of possessiveness as he came to the realization that Blade was the one for him. I do so love an Alpha male who is helpless in the face of his love for a tough heroine.

Blade was a fun, interesting heroine who finds herself in a rather difficult position. I loved Ms. Knight’s take on a dancer’s life and constant aches and pains. After a devastating injury, and let’s face it -– any injury to an athlete is potentially devastating -– Blade can’t pass up the opportunity to dance again. She isn’t aware of the fact that she is now working at cross-purposes with the entire human race. When she meets Christopher she still isn’t fully aware of her potential as a “traitor” in his eyes, and therefore has a hard time dealing with his hot and cold attitude. When Blade is finally made aware of the alien Sarthox' duplicity, she is desperate to rectify her mistake, only to find that there isn’t much she can do.

Now, part of me was just as frustrated with Blade’s attitude as I was with Christopher’s if only because I wanted her to take action quicker than she did. I had to remind myself that she was in a difficult position, and ask myself if I could handle it any differently. I don’t think I could. How do you decide against those you love, even if it could mean disaster for your world?

The love story was great, and I loved that Chris and Blade had a hard time staying away from each other, even when they both felt it would be best. I got a definite kick out of Blade’s “ah-ha” moment when she is finally able to find a way to win the day, and the eventual way she is able to do so. We get our “Yay!” moment in the end, and that’s a definite must-have for me when it comes to a love story. All in all, a very satisfying ending.

So, I would definitely recommend this book if you are looking for a love story with a bit of intrigue and suspense thrown in to keep it interesting. It was a fun read, and I enjoyed it right up to the end, hiccups and all.

Review by Viscaria
Posted by Long and Short Reviews at 8:05 AM