Review: How To Marry A Millionaire Vampire 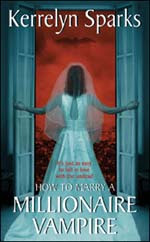 How To Marry A Millionaire Vampire
by Kerrelyn Sparks

So what if he's a bit older and usually regards a human female as dinner, not a dinner date? Yes, Roman Draganesti is a vampire, but a vampire who lost one of his fangs sinking his teeth into something he shouldn't have. Now he has one night to find a dentist before his natural healing abilities close the wound, leaving him a lop–sided eater for all eternity.

Things aren't going well for Shanna Whelan either...After witnessing a gruesome murder by the Russian mafia, she's next on their hit list. And her career as a dentist appears to be on a downward spiral because she's afraid of blood. When Roman rescues her from an assassination attempt, she wonders if she's found the one man who can keep her alive. Though the attraction between them is immediate and hot, can Shanna conquer her fear of blood to fix Roman's fang? And if she does, what will prevent Roman from using his fangs on her...

What a hoot! This was my first Kerrelyn Sparks novel, and surely won't be my last. I didn't know what to expect, but being a big fan a paranormal romance and, in particular, vampires I couldn't wait to dig in.

Poor Shanna Whelan, our heroine. Ever since she witnessed a brutal--and bloody--murder, she faints dead away at the sight of blood. This little quirk certainly wreaks havoc on her ability to be a competent dentist. But, that's okay, since she works the night shift at a 24-hour dental clinic and spends more time counting the ceiling tiles than working.

Poor Roman. He loses a fang trying out a new invention for vampires and has to have it replaced before sunrise or his body will heal and he'll be forever lopsided. One-fanged. Where to go? To the Shanna's clinic, of course.

I love Shanna's character. Within the parameters of the book's reality, she behaved just as most anyone would when confronted with the idea that vampires are out there. She's got one doozy of a temper, as well, and lets it rip with great regularity. She's strong (blood aversion aside), smart and real.

Roman is the perfect tortured soul. Having committed atrocities in his past, he's doing his best to make up for them now. And, until he realizes there is no chance he'll get away heart-whole, he fights his feelings for Shanna.

There are some unexpected twists, fantastically three-dimensional secondary characters, and a great set-up for the many sequels that follow. Good versus evil is a factor here as well, though occasionally Ms. Sparks shades them a bit.

I finished this book in one quick gulp and, the moment I finish this review, I'm grabbing book two and reading like a maniac. If you haven't read this highly entertaining, funny paranormal romance with plenty of heat, you're missing out. Grab a copy and prepare to be entertained.

Review by Poppy
Posted by Long and Short Reviews at 11:14 AM