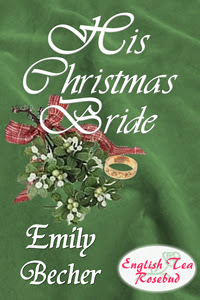 His Christmas Bride
by Emily Becher

Christmas is but three days hence and in that time Emmy must:
Attract a man's attention;
Become a master flirt;
Keep said man's attention, and
Secure his proposal.

Attending the annual Abernathy Christmas celebration, Emmy enlists the help of her two best friends and sets her sight on an elusive earl. Emmy believes her goal is at hand until Logan Abernathy shows up. Logan kissed Emmy in a midnight garden once and never forgot it. He's come home for Christmas to seek Emmy's forgiveness and return to the friendship they once enjoyed.

Unfortunately, he finds himself:
Experiencing jealousy as never before;
Kissing her at the most inconvenient times;
Losing his heart, and
Wondering if he could possibly make Emmy his Christmas Bride

It’s the Christmas season and time for Emmy to choose a husband. With the assistance of her two best friends, Ginger and Lizzie, she will soon have two men vying for her affections. Marcus Fielding, Earl of Winchelsea wasn’t the least bit interested last Season and Logan Abernathy. Logan is her best friend’s brother, and though he kissed her, he has been noticeably absent since. With only three days to find a husband before her father finds one for her, Emmy is certainly in a fix.

Emmy is a thoroughly likable heroine that garnered sympathy from this reader. She has thoroughly fallen in love with Logan but he has absented himself. Logan is a hero I would like to have known better; the brief history of the characters did not enlighten this reader. The budding romance between Logan and Emmy is sweet and romantic. Winchelsea and Emmy’s interaction was bashful, tentative and a little on the uncomfortable side. The secondary cast of richly penned characters lent a further credence and support the main protagonists seemed to need. I am glad I read His Christmas Bride by Emily Becher; it is a sweet little Regency that should delight fans of holiday novellas.

Review by Wisteria
Posted by Long and Short Reviews at 3:58 PM