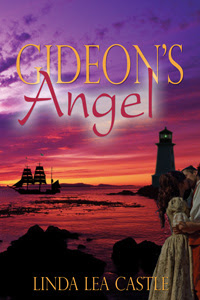 Alone since the death of her father, Jillian Montgomery thought life couldn't get any more difficult. Then she found herself fleeing from a ruthless Barnary Coast madam-straight into the path of a demented killer. Only by a twist of fate did Jillian survive. But now, on a fog-drenched island, she had become a prisoner of the very man she suspected of trying to kill her—a powerful, compelling lighthouse keeper who filled her with fear...and the unexpected heat of reckless desire.

Tormented by loss and the dark memories of a tragic shipwreck, Gideon Bolt swore he'd never let himself care for anyone again. Then someone began murdering prostitutes, and a half-drowned girl washed up on the rocky shores of his island home. Convinced Jillian was a harlot, Gideon vowed to keep his distance, until danger threatened to take her away, and he learned what his heart already knew...that this enticing beauty had the power to open the locked doors of his soul.

GIDEON'S ANGEL takes the reader to the foggy Barbary Coast of San Francisco at a time when one element of society preyed on the weaker element. Young boys were shanghaied and girls forced into prostitution.

Jillian Montgomery, an orphan with no one to turn to, tries to drown herself but the Pacific Ocean tosses her back. Starving and weak, she faints on a street in one of San Francisco's most wicked districts. She is found by Beau, a pimp. He takes her to Mary who feeds, clothes, and shelters Jillian with intentions of using her as a prostitute.

The intrigue and tension build in the foggy streets when Jillian is on the way to her first assignment. Molly, the girl with her, is killed. Jillian runs, gets lost, and finally ends up almost dead on Rook Island.

Gideon Bolt, a recluse who owns the island, finds her when he and his dog Samson return from San Francisco where he is suspected of murdering a girl. The emotional storm he struggles with as he grudgingly takes care of Jillian leads the reader to his past and the cruelty he survived.

Jillian, who thinks he may be the man who tried to kill her, lives in fear.

The lighthouse that Gideon is so determined to make functional is a symbol of hope that the reader sees as Gideon and Jillian struggle to avert disaster for others and for themselves.

Love finds a way to wiggle in despite the violence, fears, and misgivings. The reader is propelled along at a breathtaking pace as these two people navigate a multitude of obstacles that beset them at every turn. A good read to take your mind off your own troubles.

Review by Camellia
Posted by Long and Short Reviews at 6:49 AM