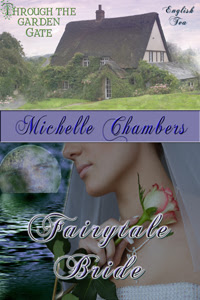 To those lucky enough to hear, the Blue Moon may speak at midnight, and it may grant your wish…

On one such night, in sheer desperation, Maddie Elliott set aside skepticism and doubt to make a wish under the magic of the Blue Moon's light… The magic brings Maddie, through a secret garden gate-to a world unknown to her, but whose sights and sounds overwhelm her senses with strange familiarity-to her heart's desire. To her wish. Incomprehension and confusion fill her heart when she meets the Earl of Ruglen. The Law of Attraction couldn't possibly be wrong, yet how could she long for someone whom she wholeheartedly despised? Surely, the Blue Moon was mistaken.

Maddie Elliot has had more than her fair share of heartbreak and disappointment. To escape a bad relationship she makes a wish upon the Blue Moon, and finds herself in an unfamiliar world. Suddenly she is thrust, literally and figuratively, into the arms of Lord Ruglen. Lord Ruglen reminds her too much of that which she just escaped. A lot of confusion then ensues for both characters.

I enjoy Regency romances; just something about that time is intriguing. Michelle Chambers does a nice job of capturing that time in just a few pages. And I enjoy time travel, so the two together is nice. I did find the character of Maddie, a bit unlikeable at first. I dislike the type who can’t fight physical attraction despite it seeming wrong. But she does find her own strength towards the end.

The character of Ruglen to me was the more likeable of the two. Despite his haughtiness, a sign of his time and station in life, he was very clear about his intentions, and let Maddie know that from the start. He isn’t doing it to be cruel, more as a defense against things entirely out of his control. The two go hot then cold a little more than I prefer, but it seems to work for them. The ending was a bit of a surprise, and it tied up all the loose ends nicely and answered all the questions that kept me a bit confused while reading.

Reviewed by Zinnia
Posted by The Long and the Short of It Reviews at 2:14 PM