Review: Escaping the Past 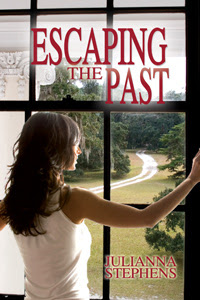 Escaping the Past
by Julianna Stephens

Lou Smith would be the first to admit that she’s the luckiest woman on the face of the earth. She lives on a farm where manners matter and the farm hands all come to eat when the dinner bell rings. Life is comfortable – so comfortable that it seems almost too easy. But Lou comes with a past, one that she will be forced to face, or die trying.

Lou’s early years were never easy. She lived a life of poverty and depravity, never staying in one place for very long. She grows up quickly when she suddenly becomes a mother and is thrust into the world alone. She resolves to try to un-live the life that her mother lived. And it seems to be easy to avoid sex, love, and danger. It’s easy until she meets Brody Wester, that is.

Brody is a handsome, successful surgeon who is way too busy for family. In fact, it’s been twelve years since he’s been home. He’s forced to face some demons from his own past when Lou calls him home to attend his dying mother. But his mother is not the only person who holds his interest.

From the outside, Lou Smith looks like an average twenty-seven year old woman. She has a successful career, a family and a daughter. But she has a secret. Most women do have secrets but Lou’s secret is more powerful than most. And it’s coming to find her.

Characterized by speed, 'Escaping the Past" by Julianna Stephens is an escape unto itself. Fast action and zippy dialogue means you won't want to put this one down. Most important is the determined and highly movitated main character, Lou (Louise) who captures our sympathies at once, and pursues her goals in varying levels of desperation, throughout. The vagaries of fate allow her that chance encounter with a good Samaratin, but she cannot rely on chance. Her history is intriguing, and only slowly revealed. Her immediate predicament is plain, but how she landed in it, less certain.

Daily life, references to horses and various stable duties create a pleasant backdrop, as do scattered, enriching details, like the smell of honeysuckle hanging in the summer air. The slightly southern sense - foods, friendships, words like 'hun' are just enough. The accurate horse tacking details add to ones' sense of reality, so riders will like this tale, although some editing program likely insisted on reigns instead of 'reins,' on occasion.

The very superior antagonist is not only unlikable, he is so unlikable, detesting him is entirely enjoyable. (And, I for one, never did warm up to the smart-mouthed, superior ass, even after he starts to dredge up slightly forgivable qualities.) But hating him goes on hold, at least for a little while, when suddenly - Lou's past returns, and we remember desperation.

This work has great, near-thriller moments, also wonderful moments of compassion and sharing. It is, in turns, intriguing, annoying, and terrifying. Yet, Stephens pulls off moments of humor, equally well. (There isn't anything quite like riding double...) I recommend this story and can't wait to see what Stephens comes up with next.

Reviewed by Snapdragon
Posted by Long and Short Reviews at 6:07 PM