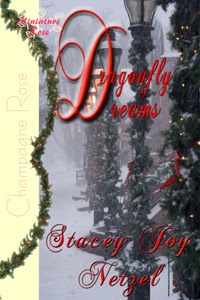 Jake Coburn's antique shop is barely surviving, so the last thing he should do is buy costume jewelry at a price that won't turn much profit. Then again, it's Christmas, and he hasn't been able to say no to Loral Evans since the first time she entered his shop almost a year ago.

Loral's mother is a cancer survivor, and much as they don't want to sell their family heirlooms, surgery and prescriptions aren't cheap. Jake's offer of one thousand dollars for a dragonfly brooch that Loral knows is fake stings her pride, especially since he knows she can't afford to walk away.

Selling the brooch, which is more than it appears, turns out to be a blessing in disguise. During a season of giving, Loral learns there's a big difference between pride and dignity, and Jake's determination to do the right thing brings rewards beyond what either of them ever dreamed of.

Dragonfly Dreams is a heart-warming yet humorous tale. Loral is a likable heroine while Jake is a genuine nice guy, but still oh-so-sexy hero. The chemistry between the two of them sizzles and their relationship unfolds naturally. The author proves that real men really can wear pink bunny shirts.

Though the ending was a bit contrived, this story had me smiling widely throughout, and I highly recommend it for a good holiday read.

Reviewed by Heather
Posted by Long and Short Reviews at 8:09 AM