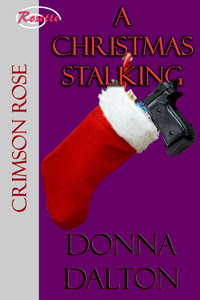 A Christmas Stalking
by Donna Dalton

Police dispatcher Shannon Malloy didn’t think her day could get any worse. But it does. First, her ex-boyfriend takes his latest flame to Jamaica – where he’d promised to take her – and then a disturbing 911 call tests the bounds of her professional skills. To top it off, her best friend is determined to set her up with the new homicide detective – a cop, just like her two-timing ex.

When the anonymous 911 caller takes a too-personal interest in her, Shannon is forced to let new homicide detective Hugh Montgomery into her apartment and her life. Her Christmas holidays heat up as a stranger stalks her and a detective pursues her heart.

Shannon Malloy trades shifts as a police dispatcher on a full moon Friday night when a creepy 911 call comes over the switchboard. The caller asks if she’s ever heard the sound of a bullet crunching through a man’s skull, then proceeds to talk about his girlfriend Delia and hints at suicide. When the call is disconnected and can’t be traced, Shannon soon lets it go to get on with the rest of her shift, but someone wants Shannon’s attention.

Hugh Montgomery is new to the area. Working on the homicide of a young woman named Delia he realizes Shannon is his only witness. When she starts getting threatening phone calls and mysterious accidents begin to happen, he sets in motion 24-hour surveillance. Though he is beginning to have feelings for Shannon, he knows she isn’t ready for a relationship yet, but he will wait as long as it takes to win her. However, Shannon may not see another day if the killer has anything to say about it.

A Christmas Stalking is a fast paced and intense holiday story that will keep you on the edge of your seat throughout. Donna Dalton introduces two strong and likable characters who are made for each other. The chemistry between Hugh and Shannon is felt from the moment of introduction and grows stronger as they become better acquainted. The mystery surrounding the danger to Shannon gets more intense until the dramatic climax. A fine holiday romantic suspense to spend a quiet hour with, it is well worth the time and money spent.

Review by Wisteria
Posted by Long and Short Reviews at 7:38 AM