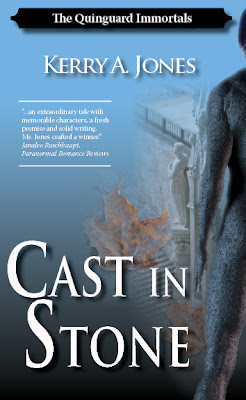 Cast in Stone
by Kerry A. Jones

He waited seven hundred years to find her. For what seemed an eternity, Julen endured a nightly punishment that never should have been his. Descended from a line of ancient warriors, he vowed not to become the creature his persecutors claimed he was - the creature they did their best to make him into. Now that he has found the healer who can end his nightly torment, the stirring she creates in his Agathyrsi blood threatens to bring more danger than redemption. She was sworn to destroy him.

Sofia Evan, owner of Fortune's Cup coffeehouse, had been raised on family lore and responsibility passed down through generations on a rare parchment. She never believed the darkness and pain in its tales to be more than myth, never questioned the reasons for the gifts that set her apart from all the rest. Until one winter morning changes everything. Now the breathtaking man who haunts her waking hours is the very being whose curse she must put an end to - one way or another.

Magnificent! This book captivated me from its opening pages and held my attention to the very last sentence. The story of Julen and Sofia is magical, tense, sexy, and spell-binding. Julen, the ancient Quinguard warrior who is cursed with a unique punishment that turns him to granite each night, has spent centuries searching for the one woman, his Healer, who can take his punishment away. When he finds her running a coffee shop in present-day Boston, it is only the beginning of their tumultuous relationship. Sofia has heard the stories passed down by her ancestors, about the “monster” who will seek to destroy her, and as soon as she meets Julen, she knows what she must do.

Stories have many layers and many tellers, however, and Sofia soon doubts that Julen is her enemy. Strangely drawn to him, she agrees to go through with the “mingling” that will set him free. The powerful attraction between these two characters turns the pages, and each caress leading up to the moment of climax is tantalizing. Julen is handsome and strong, bordering on bestial, with his warrior blood always simmering under the surface. Lithe, sweet, determined Sofia is the perfect match for him. They find themselves falling in love, but at the same time, they must outrun Julen’s enemy, who has followed him through the centuries, and try to find the rest of the Quinguard before it is too late.

The love scenes are hot and very well-written, balanced perfectly with the tension that pushes the rest of the story along. As well, the minor characters – Zell, Julen’s friend; Luc, the coffee shop violin player, Brookhaven, the arch-rival; and the collection of coffee shop employees and customers – are fully developed and add to the plot.

Cast in Stone’s storyline is complex, a wonderful combination of fairytale archetypes, complete with a brave, beautiful heroine, strong, immortal hero, dark evil that must be stopped, and puzzles that must be solved. With each chapter, Julen and Sofia are drawn closer together, but each step in revealing the ancient mystery also brings them closer to losing their lives.

This paranormal romance is a wonderful story about the power of soul mates, and I give it the highest rating, a Best Book. You won’t be disappointed in this rich first installment of the Quinguard Immortals Series. I can’t wait for the second one to be released!

Review by Dandelion
Posted by The Long and the Short of It Reviews at 3:30 PM