Review: By the King’s Command 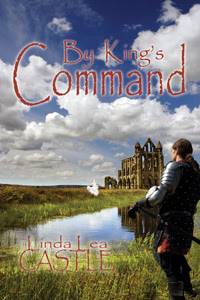 By the King’s Command
by Linda Lea Castle

SHE VOWED NO MAN WOULD CLAIM HER...
Lady Elsbeth wanted no part of marriage! Fleeing her uncle's keep with a chest of her dower coin, she believed Lambeth Abbey would offer sanctuary—with her treasure as payment. Elsbeth never imagined she would be abducted by a surly monk, who promptly revealed himself as one of her uncle's knights, come to take her home! Arrogant Roger of Angelsey was everything Elsbeth despised in a man—even if he was far more handsome than she cared to admit....

UNTIL HE PROMISED TO STEAL HER HEART

Clearing thieves from St. John's Wood was unpleasant enough before Roger encountered the hellion Elsbeth. Yet when he returned her to her uncle, Roger was astounded to find the king in residence—and himself in a position of honor. When his plan to secure disputed borderlands met with favor, he found his reward was a bride—Elsbeth! Winning her affection would be a thankless battle...until he discovered he longed to claim her heart.

Lady Elsbeth of Camley has vowed that she will not be tied down to a man, a hard thing to accomplish since King John of England is arranging marriages to secure lands surrounding the country. So she runs away from home to join the convent. Along the way she meets Roger a monk of the Order of Swift and Unrelenting Retribution. Circumstances cause her to ask him for help in getting to the Abbey. It is only later that she comes to realize that he is no monk, but a knight. Furious at Roger for not correcting her assumption, Elsbeth vows that she will make him pay.
Roger the Knight is hunting for a band of thieves that are preying the forests, wearing a monk’s habit, when he comes across beautiful, quick-tongued Elsbeth who had been robbed. Her retorts, assumption and similarity to his empty-headed cousin Millisand, who went missing two years ago, stops him from revealing his true identity.

However, these two souls are joined together in marriage by the edict of King John. Elsbeth is determined that she will never submit. Roger wants the marriage to work, however his wife is not helping by being stubborn and unrelenting. Added to this, the union between Elsbeth and Roger has created enemies who will stop at nothing to separate both of them to gain the lands that Roger now owns. Will they be able to present an united front when the enemy comes? Will Roger and Elsbeth be able to find happiness?

This is was one of the first historical novels that I have read and I must say that I enjoyed it very much. However, in the beginning it was hard to follow the olden times English. Many phrases with all the “thees” and “thous” had to be reread to understand the meaning. The twists and plots in the novel were well-handled. Elsbeth’s progress from a rebellious maiden to one that falls in love with Roger is portrayed clearly. The message that love is always victorious is declared throughout the novel, especially in the side story of Millisand and her husband. If reading King’s English is not a problem, then this is a novel I would highly recommend!

Review by Jasmine
Posted by Long and Short Reviews at 7:58 AM