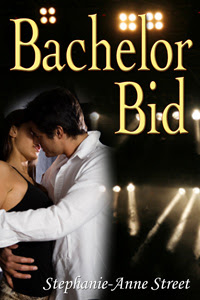 City slicker Benedict Laverton finds he has top billing at a country town’s charity bachelor ball. To escape the ordeal, he persuades one of the organizers, single mother Rosy Scott, into bidding for him with his own money. That’s fine, except Rosy experiences an acute adrenaline rush and doubles her bid to win the prize. When she goes to the stage to claim her man, Rosy not only has to face Benedict’s stunned disbelief that she’s spent a cool $10,000 of his money, but she has to kiss him too – and properly! After their spectacular kiss, Rosy’s adamant that anything more to do with Benedict would only end in teas, but Benedict has other ideas.

I have to say, first, that I did enjoy this book. The dialogue moved at a steady pace and the story was a cute, fun idea that kept my interest. I liked the development of the characters as they went from not wanting any kind of commitment to wanting the ultimate commitment. It was sweet and funny as well as touching at moments.

Benedict Laverton is a reluctant hero. He comes to his mother’s rescue, after she tells him she desperately needs his help, and finds himself shanghaied into top billing in a bachelor auction. This is not his idea of a fun evening, he feels like a man being circled by sharks… with chum in the water! Desperate, he locates the one female in the crowd who seems totally disinterested in the prospect of bidding and propositions her… sort of. He gives her a check to use to bid for him so he can get out of the “intimate dinner for two” that comes with the winning bid. From that point on his plans go awry. He is a funny, determined hero who realizes rather quickly that Rosy is something special, and he wants to keep that special in his life.

Rosy Scott is a single mother, who is active in the charities and causes of her small town. She never participates in the bidding on the bachelors, and is usually too busy helping out to pay much attention to the goings on. When Benedict Laverton surprises her with his request, she almost lets him fend for himself. How uppity to think he can get out of a commitment he’s already made? She has no idea he was railroaded into his gig. As the bidding starts she sees the panic and her soft heart kicks in and Rosy takes pity on the city slicker. Then, she gets carried away, and doubles his idea of a reasonable bid--to the sum of $10,000 of Benedict’s money--and gets pulled into the most bone-melting kiss of her life.

Rosy is a spunky, tough lady who has had to go it alone long enough that she doesn’t really need a man in her life. Well, at least she doesn’t think she needs a man, but this Benedict Laverton bloke won’t stay out of hers.

Now, let me get it out of the way. I did have a few issues with this story, but none that were major. While the conversations and interactions between characters were sometimes downright fun and fast-moving, I also found that some of the situations were a bit predictable. Just a point in fact; everything is finally starting to move along well between Benedict and Rosy and then there comes the “big misunderstanding”. You know which one, the one that seems to just destroy any chances of happiness for the couple. While I knew that the author would work it out, I was still a bit disappointed that it wasn’t presented differently, in a more creative way. The end result was very satisfying, however, and I quickly got over my pique.

This was a great read, all in all, and I enjoyed the author’s perspective on Ben and Rosy’s relationship. I found that the first kiss, in front of a live, loud audience, was one of the best first kisses I’ve read in a long time. The added aspect of Rosy as a single mother held my interest as she struggled with what was best for her children versus what her heart wanted. It was great fun to try and figure out how the adults were going to respond to the antics and questions of Rosy’s precocious boys. As a mother, I’ve been in a few of those situations and found a good chuckle at what could happen next, not to mention the menagerie of pets that Rosy and her boys seemed to collect. The pets had their own foibles that added more hilarity to some unexpected situations. In conclusion, I have to say that this is a fun read that will ultimately leave you smiling in the end.

Reviewed by Viscaria
Posted by The Long and the Short of It Reviews at 1:57 PM