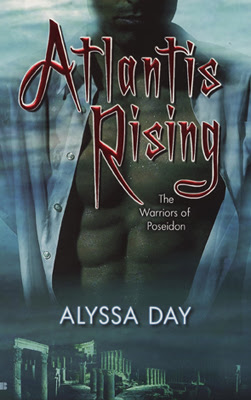 Eleven thousand years ago, before the seas swallowed the Atlanteans, Poseidon assigned a few chosen warriors to act as sentinels for humans in the new world. There was only one rule-desiring them was forbidden. But rules were made to be broken...

When she calls... Riley Dawson is more than a dedicated Virginia Beach social worker. She's blessed with a mind link that only Atlanteans have been able to access for thousands of years. Being an "empath" may explain her wistful connection to the roiling waves of the ocean, the sanctuary it provides, and the sexual urges that seem to emanate from fathoms below...

He will come. Conlan, the High Prince of Atlantis, has surfaced on a mission to retrieve Poseidon's stolen trident. Yet something else has possessed Conlan: the intimate emotions-and desires-of a human. Irresistibly drawn to the uncanny beauty, Conlan soon shares more than his mind. But in the midst of a battle to reclaim Poseidon's power, how long can a forbidden love last between two different souls from two different worlds?

The icy winter wind blew, snow accumulated, and I laughed. Not at the weather outside but at the witty banter between Ven and Conlan. Two characters in Alyssa Day's, Atlantis Rising, the first book in The Warriors of Poseidon series. Atlantis Rising offers humor, a great love story and a wonderful escape from the winter blahs - a fresh choice in the paranormal market.

Riley Dawson lives in a world where vampires openly hunt humans (even hold congressional seats) and shape shifters are old news. Thinking she has seen it all, enter Conlan, the high prince of Atlantis. Conlan offers complications to her already complicated life as well as a hefty dose of sexual tension.

Ms. Day thrusts the reader into Riley and Conlan's life so rapidly and completely, it is almost impossible to put the book down. Riley has had a bad day.... a really bad day. In an effort to unwind from the days events, she retreats alone to the beach. Only instead of the peace of the surf, Riley finds herself in danger. She realizes that vampires are approaching her.

Conlan has just returned to Atlantis after being held prisoner by Anubisa, (a really not nice vampire!) for seven years, eleven weeks, and three days. Once his health is restored, Conlan is told that Poseidon's Trident has been stolen. He leaves Atlantis with the Poseidon's high priest, Alaric, and the seven (the elite guard of the high prince). The mission is simple - find the Trident and return it.

Soon Conlan realizes nothing about this mission is going to be simple. On the way to the surface he feels Riley's fear. Totally unprepared to encounter an aknasha, (it has been ten thousand years since the last aknasha), Conlan speeds to Riley's rescue. Soon after rescuing Riley, Conlan realizes that his attraction to Riley may be more than just sexual.

Riley is wonderfully developed. The reader will be instantly drawn to her. Riley is strong, funny, yet not overpowering so. Her character is developed with incredible depth and dimension. I loved Riley's humor but found it even more appealing that she never denies her attraction to Conlan.

Conlan is a fully developed hero. He is caring, fun with attitude to spare. Conlan soon finds Riley offers him something he never thought possible - an escape from the memories of his tortured years.

While Atlantis Rising's main focus is the story of Riley and Conlan the plot moves quickly with plenty of twist, turns and intrigue. Alyssa Day does an amazing job of developing a secondary cast that is intriguing and compelling. The reader will get to know each of the 'seven' through out the book. Quinn, Daniel, and Jack offer the reader more story with characters equally defined and dimensional. Where many writers may have chosen to fill some of these roles with cardboard characters, Alyssa Day repeatedly gives the reader characters that will entertain and draw them in.

Atlantis Rising offers a wonderful escape from the winter blahs....one that I will repeatedly enjoy.

Review by Magnolia
Posted by Long and Short Reviews at 7:52 AM