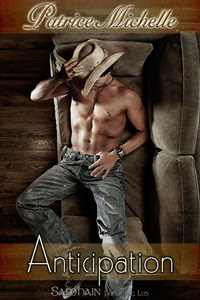 What if the “one who got away”…didn’t?

Deidre Nelson has never forgotten the man who stole her heart so effectively a decade ago. When circumstances bring her back to Ventura, Texas to look after her parents’ B&B, she prepares to face Jonas Mendez, the sexy wrangler-turned sheriff, with growing anticipation.

Deidre’s engaging smile and seductive gaze has haunted Jonas for ten years. But life’s cruel ironies pepper his past, leaving him guarded and wary. He vows to keep his interaction with Deidre strictly professional while she’s in Ventura.

But when vandalism at the B&B turns life-threatening, Jonas finds himself intimately involved with the one woman he has always wanted but never touched. As a decade of built-up anticipation becomes reality, suddenly the line between protector and possessor begins to blur.

Jonas Mendez used to be her family’s wrangler when she was a teenager. Deidre has been away from Ventura for a decade, but hasn’t been able to get him out of her mind. It’s the right thing for her to do to move on, especially when they never acted on their attraction to begin with. But why can’t she get him out of her head . . . and her fantasies?

This was the first book by this author I have read, and I wasn’t disappointed. Jonas was a very well-developed character that showed depth and emotion. He was hot and sexy, but also so very vulnerable underneath the surface as a result of his past. Deidre seems young, but I liked her, too. Her thoughts and reactions were very realistic.

The vandalism back-drop of the story is realistic and integral, but doesn’t get too overpowering. It creates the circumstances for them to be thrown together again and awakens Jonas’ protective instincts. The sexual encounters were very hot. The tension the author creates between them is fabulous. Hey, there’s a reason she titled it “Anticipation.” I would definitely read the author again.

Posted by Long and Short Reviews at 6:56 AM