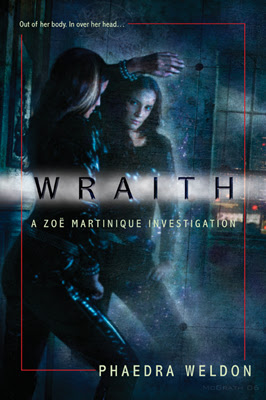 Zöe Martinique was just your average, single female, past 25, looking for love and/or exciting job opportunities. Until life handed her the dubious ability to travel outside of her body at will—which she turned into a career, hiring herself out as a literal spook. Industrial espionage, domestic surveillance, you name it—when she’s traveling she can see but can’t be seen…

Then one night things get out of hand while she is out-of-body: Zöe witnesses a murder. What’s worse, the killer is also a Traveler—and he most definitely not only sees her, but tries to pursue her.

To save herself, Zöe must somehow guide the very handsome detective assigned to the case to the truth without revealing herself. And with the help of her semi-psychic mom, a pair of gay ghosts, and her best friend (a Goth techno witch), she also has to figure out exactly who—and what—the murderer is, before he finds her and puts an end to her traveling—permanently.

Phaedra Weldon is an exciting, emerging talent on the Urban Fantasy scene. Her first novel, Wraith, is tightly plotted and fast paced with plenty of twists and turns. But her talent really shines through her main character, Zöe Martinique.

Zöe is the best kind of modern heroine: kick butt and strong with a soft underbelly. Zöe tends to act before she thinks and her impulsiveness may annoy some readers as well as her propensity for interjecting comments throughout the first-person narrative. I thought the latter was charming. Zöe is funny, sarcastic, outspoken, and her insights had me giggling more than once. She’s a breath of fresh air in a crowd of tortured, scowling paranormal characters.

That isn’t to say that life is easy for Zöe. A painful event in her past still affects her daily life. She almost dies more than once, and a change in her power makes her doubt herself and who she is. But she gets through things with the support of her family and friends, and her own aplomb. All of that makes Zöe seem like an everyday woman. It’s easy for the reader to connect to her.

The romance in Wraith is a little light, but I suspect that will be remedied in future installments as Zöe’s dry spell is quenched with her detective, while a mysterious savior and the man of her nightmares wait in the wings, effectively making a potential love quadrangle. Ms. Weldon can’t write the sequel fast enough for me.

Review by Daisy
Posted by Long and Short Reviews at 6:08 PM