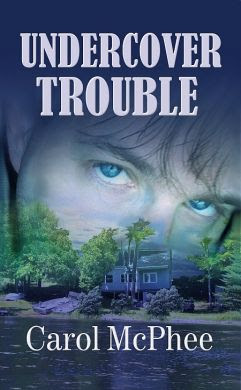 Jen Murray needs a clear mind to deal with the tragedy that brought her into hiding. Unfortunately, a noisy new neighbor upsets the peaceful calm of her quiet lakeside cottage and sends her emotions into a tailspin.

Mitch Waverly is a cop with a mission: take down the notorious motorcycle gang he’d infiltrated and put them away for good. Except he didn’t anticipate the nosy woman next door, nor the effect she had to knock him off balance with nothing more than a smile.


In UNDERCOVER TROUBLE, Carol McPhee takes the reader out into the boondocks in Nova Scotia somewhere by a lake where the loons call to each other.

The reader finds Jennifer Murray, a social worker on hiatus after shooting a motorcycle gang member, living in a rundown cabin near the lake. The police had suggested she get out of town for a while until the furor died down about the shooting. She bought the cabin with plans to refurbish it so she can escape the city when she’s not working at the transition house for abused women and children.

With only her little dog, Spooky, she plans to be all alone. To her dismay, the neighboring, upscale cabin, that the real estate agent assured her was rarely used is occupied.

Mitch Waverley, an undercover cop masquerading as a motorcycle gang member is living there. He, too, thought he’d be alone, as did the police department head who had leased the cabin for Mitch to stay in. They’d planned for no one to know where he lived while he was undercover.

He works late at night since he’d infiltrated the gang. In the early morning hours when he tops a little rise near Jen’s cabin, he revs the motor of his Harley. The growl of the motor gave him an adrenaline rush.

Jen doesn’t enjoy that sound as much as he does at three o’clock in the morning. It makes her temper flare.

She and Spooky march over to give Mitch “what for”. When the giant of a man in biker garb with shaggy hair and beard jerks the door open, she knows she’s flown to close to a flame. “Her brain hissed a warning.”

Since they both need privacy to avoid being killed, neither really trusts the other. Hostility flares often. Also, an unwanted sexual attraction flares and refuses to go away. A repressed memory makes Jen fearful of a sexual encounter, but she can’t get Mitch out of her mind. Mitch fumes about her sneaking into his mind distracting him, but his heart yearns for her.

When danger intrudes, he rescues her from everything from leeches to lechers as they both, in their own way, struggle to make the world a safer place.

Bull, the motorcycle gang leader, and his cohorts kidnap Jen and Spooky making for tension that sizzles. After this terrifying experience, Jen seeks professional help to uncover the repressed memory that has all but paralyzed her for moving on with her life.

UNDERCOVER TROUBLE is romantic suspense with an edgy tension that holds the reader captive – a page-turner worth a second read.

Review by Camellia
Posted by Long and Short Reviews at 5:07 PM