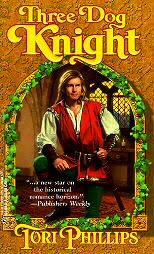 The white rose of York was no hothouse flower. Nay, Mistress Alicia Broom was a long-stemmed beauty with a dangerous secret of royal proportions. But for a chance to claim her as his promised bride, Thomas Cavendish would fight the hounds of hell!

Though plots and plans and barking dogs seemed to pursue the Earl of Thornbury wherever he went, Alicia knew she’d found a champion. Mayhap Thomas Cavendish was not what people expected, but the gentle knight had become her heart’s desire.

Three Dog Knight, the prequel in Tori Phillips’ “Cavendish Chronicles” historical romance series, is a winner! In this tale set in fifteenth century England, Alicia Broom is promised to Thomas Cavendish when they both are children. Alicia is the foster daughter of a goldsmith, though secretly a child born of royal blood. Her foster parents pair her with an unlikely but suitable future husband in Thomas, the third son in the Thornbury line.

Ten years after the initial marriage contract, Alicia’s foster parents deliver her to Thomas’s doorstep. Alicia has become a beautiful, strong-willed, and capable young woman. Thomas, in turn, is now heir to the Thornbury estate, since his father and two older brothers have died in a recent plague. He is an awkward Earl, though, who prefers the company of his three dogs to any human being. He is strong and handsome but also a virgin, a secret kept by his flirtatious but loyal servant, Andrew.

When Thomas sees the grown-up Alicia, he falls desperately in love but is totally incapable of expressing his feelings. Instead, he flees to his dogs and his horses and goes hunting at all hours of the day and night. Alicia, meanwhile, is hopeful that she will find a permanent home with Thomas and goes to work befriending his servants, preparing delicious meals, and cleaning out the dusty estate home. But her presence there is a threat to Isabel, widowed sister-in-law to Thomas, and Isabel wastes no time in plotting Alicia’s demise.

The chemistry between Alicia and Thomas is utterly convincing. Each feels attracted to the other, but their innocence and lack of experience prevent either from making any kind of move. Thomas writes her love letters but is afraid to sign them, so Alicia thinks they are from Andrew. Alicia longs to hear words of love from Thomas, but she begins to think he is only marrying her to honor the original marriage contract.

The way these two characters become comfortable with one another, and move from nervous respect to open friendship to passionate love, is a wonderful tale. Thomas is hot, strong, and sweet – and I really liked the fact that he’s an inexperienced virgin rather than a typical vanquishing knight. His stumbling affections for Alicia are completely charming. Alicia is a likeable heroine, too, though she waffles between being intelligent and insightful and then second-guessing Thomas’ feelings for her. That inconsistency in her character was the only thing that kept me from giving this 5 books.

Otherwise, Three Dog Knight is a great historical romance – I’ll definitely pick up the rest of the Cavendish Chronicles by Tori Phillips!

NOTE: If you have a private Blogger profile with no email address available, you must include an email in your entry -- this is how we inform the winner. If we are unable to locate an email for you, you're not eligible to win this prize. Thanks!

Posted by Long and Short Reviews at 10:22 AM