Review: Ten Things I'd Do For A Cowboy 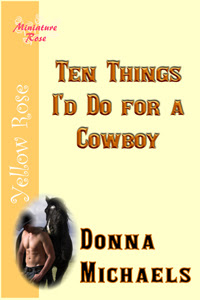 Ten Things I'd Do for a Cowboy
by Donna Michaels

Journalist, Amanda Lang, wishes she’d never written the article, “Ten Things I’d Do for a Cowboy”. Thanks to her, cowboy Rafe Buchanan lost his marriage, his bank account and nearly his ranch because it had been her husband his wife ran away with. Now, two years and a divorce later, Amanda is back on Buchanan soil to write another article, film a documentary and deliver a face-to-face apology.

Rafe Buchanan wants the woman gone. The Buchanan Wild Mustang and Burro Transition Ranch is his life and, after almost losing it once, he isn’t about to allow another disaster. But when he sets out to make the beauty voluntarily leave, his tactics take an unexpected turn. Could there be more than wild horses in transition on his ranch?

This western-set romance with snappy dialogue features an intriguing opening and carries on with an inventive storyline. The two main characters are strong and believable. The secondary characters are well-developed, especially for the space of this tale- but every word counts. The ranch, the round-up, the details of the documentary all have a true ring to them, and add to the tale.

The tangle the main characters, Rafe and Amanda, find themselves in starts with a clash back in the past. Although both are genuine, neither is especially trusting, especially of one another. Their obvious chemistry (even to themselves!) only makes the trust issue ever more important.

Personally, I love how the work was built around the transitioning of the American Mustangs and burros - a very contemporary and plainly heartfelt topic that adds a wonderful touch to this work. Michaels depicts the animals with great accuracy, but also great empathy; she brings them to life in this work.

" A trotting colt in the nearby corral, caught her attention.Held back from the last batch, he stood his ground with the remaining stragglers, but his soulful eyes appeared unsure..."

This is a fun, speedy read; a contemporary western-based romance that is believable and moving.

Review by Snapdragon
Posted by Long and Short Reviews at 4:26 PM