Review: Tears of the Moon 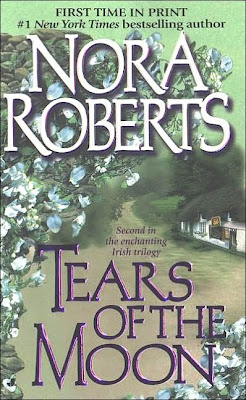 Tears of the Moon
by Nora Roberts

Roberts' second novel of an enchanting Irish trilogy featuring the dreams and passions of three extraordinary siblings. Shawn is a songwriter whose music tells a story of loneliness and desperate longing. It isn't until he gives into the mysteries of magic that he is gets the chance to become a successful musician and a man in love.

In a very well-written book, Ms. Roberts gives us skillfully done role-reversal. Shawn is a quiet, introspective artist -- both creating music and creating edible masterpieces in the kitchen. He knows nothing about mechanics or other "manly" pursuits.

Brenna O'Toole is a tiny, abrasive go-getter who's the best mechanic in Ardmore. Where she is brash, he's calm. Where she is fast-paced and eager, he is contemplative.

After knowing Shawn her entire life and being like siblings in all but blood, Brenna decides she has a yen for him in an entirely different way. Being who she is, she just comes right out and propositions him. Horrified at first-- for why would he be interested in his sister-of-sorts?-- eventually Shawn becomes intrigued instead.

Brenna is stubborn, though, and isn't willing to take things at the snails pace Shawn wants to go. Add Brenna's younger sister -- who has a crush on Shawn-- a broken-hearted ghost, and an impatient Fairy Prince to this battle of wills and you have a sexy, entertaining read.

Though this is not my favorite of the series (the first book, "Jewels of the Sun" is), I still enjoy this book every time I pick it up.

Review by Poppy
Posted by Long and Short Reviews at 5:56 PM