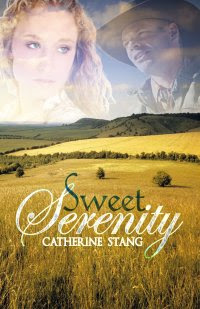 Recently orphaned heiress, Serenity Springfield, fled the prospect of a brutal marriage to her brother's best friend for the promise of a new life with widower Collin MacClarron and his four daughters only to find that trouble followed her. Can she protect her new family from her dark past when she doesn’t dare reveal it?

Guilt-ridden widower, Collin MacClarron blames himself for his late wife’s death. Although he knows he needs to remarry for his daughters’ sakes, he isn’t ready to open up his heart or is he? Can he accept this second chance at happiness or will he let Serenity’s past mistakes keep them apart?

From the streets of New York, to a train headed for Dry Gulch, Kansas, Serenity Springfield is embarking on a new life with widower, Collin MacClarron. Beginning as a companion to Rose MacClarron, her uncle’s fiancée, and governess to four young girls, Serenity is hoping to escape the violent man who brutally beat her, Rudgewick Tarrington. Rudgewick is the man her brother has chosen for her husband, despite Serenity’s pleas to spare her. With her father dead and no other relatives to turn to, Serenity hopes to leave behind the fear and pain of her brother’s betrayal. Little does she know danger has followed her to Kansas; is she putting this family in danger by coming here? And what will she do when her secrets catch up with her?

Collin lost his beloved wife and five-year-old daughter to a fever and has since shipped his other daughters to New York to live with his grandmother, Rose. When the family arrives in Dry Gulch Rose has a scheme; Collin will marry Serenity and protect her from harm, with Serenity becoming the mother his children so desperately need. Along the way, if the tow people she cares about most find love, so much the better. Collin is conflicted; Serenity is a temptation he has not run across since his beloved Katrina died. He is drawn to the haunted young woman yet cannot trust his heart again, but something tells him she needs him as desperately as he and the girls need her. What’s an honorable man to do?

Sweet Serenity is a character driven historical romance full of heartfelt emotion and chilling tension. Collin, Serenity and the girls are a charming little family that will tug at the hardest hearts and provide plenty of laugh-out-loud moments. Rose is a lively and eccentric grandma who provides a few shenanigans to insure she gets her way. The chemistry is palpable between Collin and Serenity and yet the fear that has Serenity in its grip is realistic and deeply emotional; I was glad to have the tissues handy. Rudgewick is the essence of evil; a lecherous sociopath who feels he rightly owns whatever he covets. He has no qualms about committing the vilest acts with no remorse whatsoever. The edgy tension of his presence in Dry Gulch pulses throughout the story, keeping this reader in its icy grip. Author, Catherine Stang has found a place on my “watch for” list; she has sold me on her ability to capture romance and suspense in a historical novel; Bravo.

Review by Wisteria
Posted by Long and Short Reviews at 12:23 PM